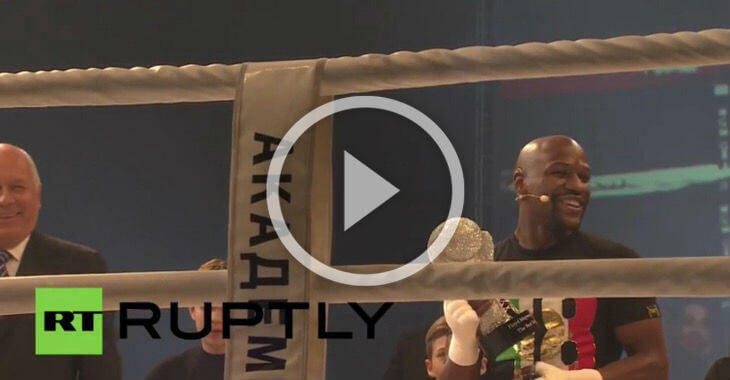 Floyd “Money” Mayweather may be retired from boxing but the former pound for pound fighter in the world still has more to give to the sport. A masterclass held by “Money” broke last year’s record.

The boxing legend invited hundreds of fans to attend training session, held in the ring at a local concert hall, and organized by Boxing Academy in association with Russian Timber Group and State Corporation Rostecheld.

The invitation turned out many boxing fans and enthusiasts with 791 people taking part in the session, and roughly 3000 spectators observing. The event broke a Guinness World Record for the amount of people who took part in the masterclass lesson.

The previous record was set in 2014, with only 508 people attending the event. The open session in Moscow was attended by official Guinness World Records judge Sofia Greenacre, who presented Mayweather with the award.

Mayweather is considered one of the most dominating boxing figures in the sport, winning all 49 of his bouts; with 26 by KO. The 38-year-old officially retired from the sport in September, producing world titles in five weight divisions and earning nearly one billion dollars in purses and endorsements.

Any chance that one of the greatest boxers in history would come out of retirement? Enjoy the video.