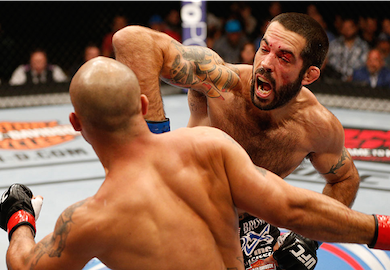 Not too long ago, Matt Brown was about to call it quits. The questions that plagued his career coupled with some ups and downs seemed overwhelming. No matter the fighter — from Georges St-Pierre or a guy fighting in the regionals — there comes a time where you have to ask yourself if you’re going to keep doing it. When Matt Brown asked himself that question and searched real hard, he found clarity. Hell yeah, he’ll keep doing it.

“I just started kind of questioning, ‘What am I doing?’ The first thing I went through was, ‘How do I not make it happen again?’ That gets very exhausting when you just think of, ‘How? How? How?’ Right? And I think through the Diego camp – because I announced retirement very early in the camp, like 12 weeks out – through the camp, everything went so well. I focused more on my own mind, and I started getting back into the, ‘Why?’, and I started bringing clarity to that side of things.”

Honored to have been a guest today on the best podcast ever with @joerogan hope you guys are able to listen and enjoy! pic.twitter.com/bI5UJr8KIo

“Now I know why I’m doing what I’m doing. I feel much more comfortable, and now, it doesn’t matter on the performance anymore. Now, it’s about truly going out there and performing the best that I can. To be honest, I think I’m f-cking hungrier than I ever was. It just wasn’t clear. Again, it was all about the, ‘How?’ I think I was hyper-focused on that, like ‘How do I get stronger?’ ‘How do I get faster?’ ‘How do I throw a better punch?’ It’s just constant ‘Hows’, and you forget, like, ‘Why are you doing this, anyway?’” – Matt Brown speaking on the Joe Rogan MMA Show.

His opponent is no stranger to the feeling either. After a loss to Demian Maia, Carlos Condit was ready to put the gloves in the middle of the Octagon and never come back. He was content to work on his coffee business and see where his life went from there. Yet, here they both are booked to fight each other in a fan-favorite, Fight of the Night contender at UFC Glendale. You’ll want to tune in on April 14th and soak it all in because we’re going to miss warriors like Matt Brown and Carlos Condit when they finally do leave us.