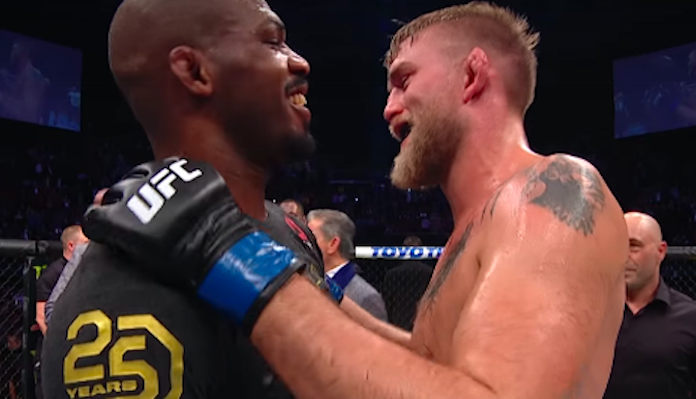 Last Saturday night, in the main event of UFC 232, Jon Jones and Alexander Gustafsson stepped into the cage for a rematch five years in the making.

In the end, Jones would win this fight via third-round TKO, moving to 2-0 over Gustafsson in the process.

Despite sharing one of the light heavyweight division’s great rivalries, it’s clear that there’s nothing but respect between Jon Jones and Alexander Gustafsson. In the moments after the fight ended, the two fighters shared a classy exchange. Jones assured that he knows Gustafsson isn’t going anywhere, and Gustafsson conceded that Jones is the best in the world.

You can hear the pair’s sportsmanlike exchange — a far cry from their pre-fight trash talk — in the UFC 232 instalment of the UFC’s popular The Trill and The Agony series.

“I know you’re not going anywhere,” Jones says to Gustafsson after the fight.

“I’m not going f***ing anywhere,” Gustafsson replied. “You were great. You’re the best in the world.”

Earlier in the same video, you can also hear what Amanda Nunes and Cris Cyborg had to say to one another after their co-main event superfight. Just like Jon Jones and Alexander Gustafsson, they were the picture of class to one another post-fight.