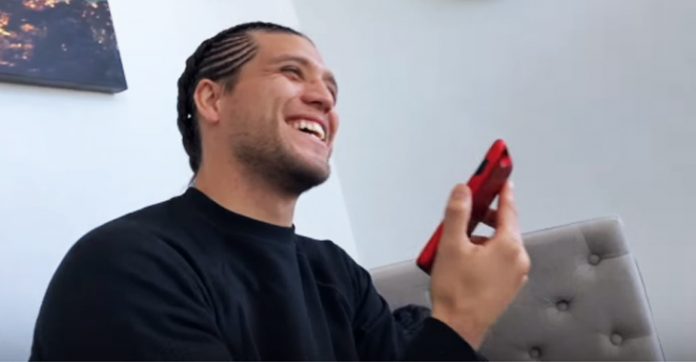 After Brian Ortega’s historic finish of former UFC lightweight champion Frankie Edgar, there wasn’t really any doubt that he deserved the right to challenge Max Holloway for that featherweight title. However, we all know that nothing is certain in this world, especially in combat sports. One phone call can change all that and that’s what this video is all about. Check out Ortega smiling ear-to-ear reacting to Dana White calling him to tell him he’s got the shot.

“I heard 227 in August was supposed to be UFC Hawaii, but I Tweeted 226 because you know, I gotta move on. You can’t hold this stuff forever, I can’t hold my breath. I got a life, I got a family to take care of, I got a little kid, I got fans. If I can’t get UFC Hawaii I said, the Ninth Island is the next best thing. It’s tough pill to swallow but at the end of the day, it is what it is. We can’t control nothing. All we can do is create buzz. I’d like to thank all the fans who are creating buzz.” — Max Holloway speaking to KHON 2.

While there isn’t a date determined for Brian Ortega challenging Max Holloway for the UFC featherweight title, UFC 227 at Aloha Stadium in Hawaii was in negotiations which has since stalled. This prompted Holloway to campaign for a slot on UFC 226 headlined by Stipe Miocic’s superfight with Daniel Cormier.

The best thing about all of this is that receiving the call from Dana White was only a short clip from the whole video. Instead of talking about the fight with Frankie Edgar or an upcoming bout with Max Holloway, Ortega once again used his platform to talk about his Brian Ortega Foundation and T-City Scholarship program to benefit the his community and give back.