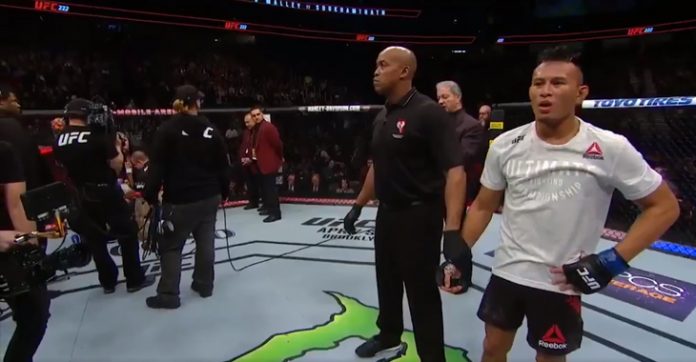 When Sean O’Malley’s foot was in so much pain he couldn’t stand on it at UFC 222, fans and the cornermen of Andre Soukhamthath were yelling at him to stand-up but instead he took him down. In the heat of battle, it’s hard to criticize someone, especially after the amount of punches they absorb. That didn’t stop trolls from insulting Soukhamthath though, but humble Soukhamthath thinks they aren’t entirely wrong.

“I’m getting trolled right now by so many people. They are calling me the dumbest fighter in MMA. The dumbest fighter in UFC history. Even my friend Rashad [Evans]. Everyone is wondering why I decided to wrestle, and I’m wondering the same thing. After he rocked me, I still stayed in the fight but I was kind of dizzy and dazed afterwards. That shot really threw me off the rest of the game plan in the fight. I really wasn’t there. I think I was just fighting with instincts. I definitely regret it because I’m a striker first and a wrestler second.”

“The cameras were in my face all week. I love that feeling but it is really exhausting. I’ll be ready to do another fight camp in a little while. I just want to have some time with my family and get better in the gym and then have another fight. Even if people are still talking about my fight, I’m not really hearing it. I know what I did wrong. I realize what I did. I’m going to capitalize on my mistakes and learn from this. I’m not going to let opinions of others get in the way of my life. I’ve been through this before and I’m not going to let it bring me down.” — Andre Soukhamthath speaking to ESPN.

This type of self-reflection shows that Andre Soukhamthath has a strong mentality. That sort of ability only serves to improve a fighter. He knows what he did and doesn’t intend on making that mistake again. We’re always quick to criticize from the comfort of our own homes, we should be even quicker to praise a fighter for making a good decision. Soukhamthath is going to go back to the drawing board and rebuild in camp.