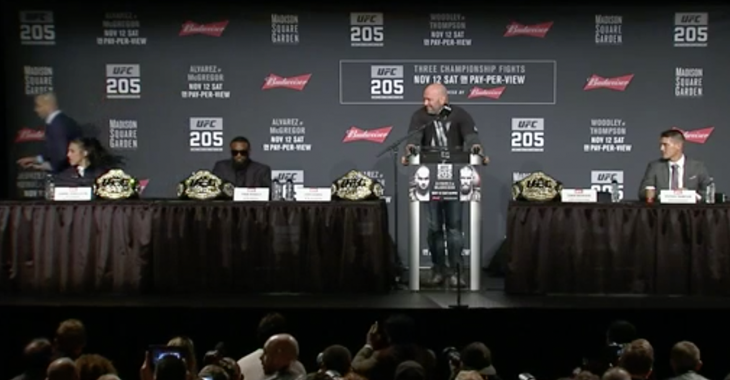 The UFC 205 pre-fight press conference kicked off in New York at 5pm EST and once again the star of the show has decided to be on his own schedule.

The crowd was definitely on Conor McGregor’s side and showered the UFC lightweight champion with boos.

The crowd was very loud as MMA Fighting’s Ariel Helwani pointed out. Helwani tweeted, “The crowd is set up like we’re in the middle of a mosh pit. Very raucous crowd.”

The crowd is set up like we're in the middle of a mosh pit. Very raucous crowd.

At one point, Eddie gets asked a question from the media and then makes his own statement.

“I don’t even have an opponent. Yo, when he comes, you give me a call!”

Eddie Alvarez couldn't take the crowd taunting anymore. He pulled a Nate Diaz and just got up and left. Wow. #UFC205