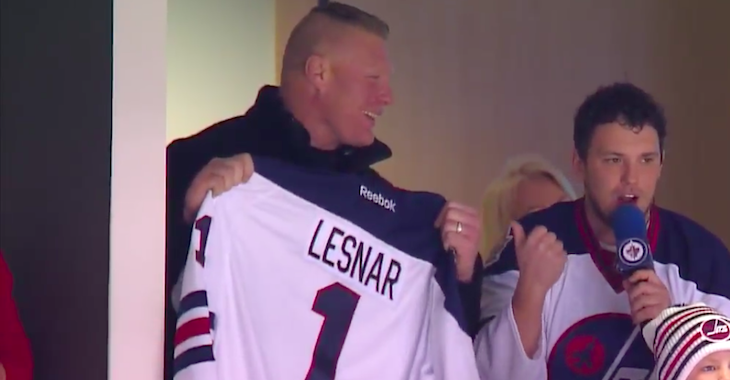 If you watched the landmark UFC 200 back in July of 2016, you may have noticed that returning former heavyweight champion Brock Lesnar walked out to the Octagon in a Canadian Reebok fight kit. A quick look at the WWE star’s Wikipedia page, of course, reveals that he was born in South Dakota. He’s as American as apple pie. At least, he used to be.

More recently, Lesnar and his family have relocated to a farm in the quiet Canadian prairie town of Maryfield Saskatchewan. Lesnar’s setting up shop in this tiny town – which is home to less than 500 people – is the reason for his walking out in Canadian colors at UFC 200. It’s the also the reason for his on-air appearance during a Monday night Winnipeg Jets NHL broadcast.

During this broadcast, Lesnar received a personalized Jets heritage jersey, talked a bit about his love for hockey, and encouraged the Winnipeg crowd to turn up the volume. See his on-air appearance below.

“My kids are in hockey,” Lesnar said of his love for the sport. “We moved to Canada, there’s nothing better than hockey, Canadian hockey, that’s what we love about it.”

“Winnipeg Jets fans, I can’t hear you,” Lesnar continued after being encouraged to pump up the crowd. “I heard you’re the loudest. There we go, let’s get fired up!”

After this appearance, Lesnar took a tour of the Jets locker room, where he committed an NHL taboo by stepping on the team logo on the floor. Whoops.

After defeating Mark Hunt at UFC 200, which marked his first fight in some 5 years, Lesnar found himself in hot water, testing positive for the estrogen blocker clomiphene. After a prolonged bureaucratic process, he was suspended for one year by both the Nevada State Athletic Commission (NSAC) and the United States Anti-Doping Agency (USADA). The NSAC also fined him $250,000 and overturned his win over Hunt. It now exists as a no contest on his record.

What do you think of this Brock Lesnar NHL cameo? Sound off, PENN Nation!