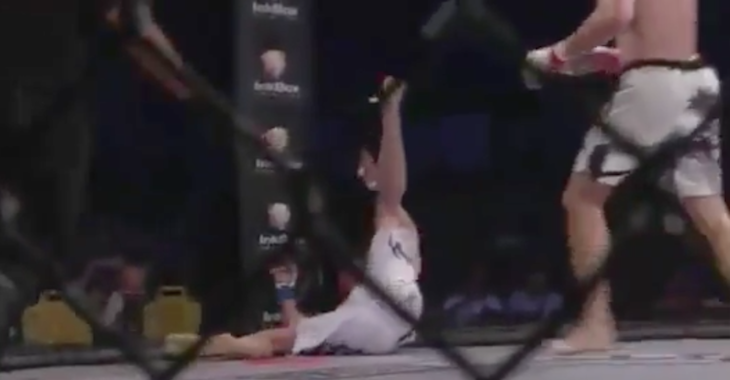 Austin Hubbard (10-2 MMA) finished Killys Mota (11-1 MMA) in the fifth and final round to capture the promotions vacant lightweight title.

It was an absolutely stellar performance by Hubbard, but unfortunately that is being overshadowed by the controversial ending to the fight.

As seen in the video below, last night’s Hubbard vs. Mota main event produced one of the worst referee stoppages in recent memory.

“He’s unloading elbows. But Mota is back on his feet. He takes another shot and he is down! Hubbard is all over him. The referee stepped in like he was going to stop it, but then backed out. Stop the fight. Stop the fight!” screamed the announce team. “Fans are booing here in Minnesota. This is a joke! He’s not defending himself! Stop the fight! What! What are you waiting for. Now it is over. After an unnessecary beatdown.”

Meanwhile, Austin Hubbard is now 10-2 overall and has won six of his past seven fights overall.

Where do you believe last night’s LFA 56 main event stoppage falls on the list of worst referee stopagges of all time? Sound off in the comments section PENN Nation!