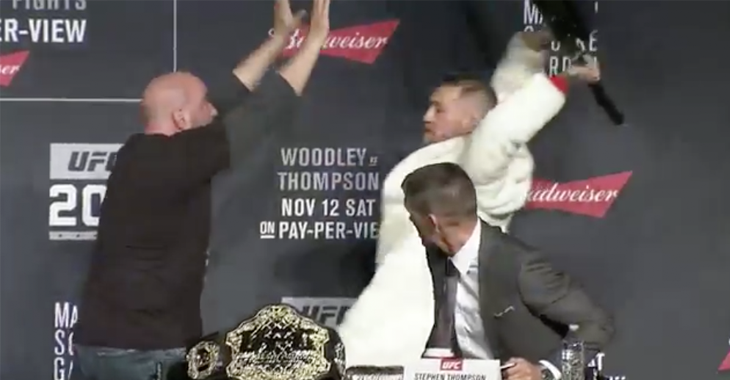 While this might be true for most promotions, it is not the case for Singapore-based ONE Championship.

In the past, ONE Championship President Victor Cui has explained that his focus is on building fighters that Asian fans can relate to and admire, and fighters that embody the traditional values of martial arts.

In a recent interview with MMAFighting.com, he elaborated on this, explaining that many of ONE’s fans have a difficult time stomaching the bravado and machismo present in fighters like McGregor.

“They were not connecting with Baroni,” Cui said. “I thought that they would, but it made them hate our brand more. They didn’t appreciate it.” Cui then explained that McGregor – who infamously engaged in a press conference water bottle throwing battle with Nate Diaz in 2016 – would be a liability in some of the countries where ONE promotes events.

“Let’s say we had a press conference in China and he threw a water bottle,” Cui said. “I would go to jail. They’d put me in jail. I’m not kidding around.”

“At the end of the shows in China, I meet with the government officials and they have a checklist,” Cui said. “Did we play this song, did we play this song? If you played one extra song, they can throw me in jail and they’ve done that to other concert promoters.”

Cui then added that even Ben Askren, one of ONE’s top stars, has gotten mixed reactions from the Asian fans. Conor McGregor, then, would probably be received the same way.

“After [Askren] won [a recent fight], he stood in the cage and he didn’t say anything really cocky by any standard,” Cui said. “I think he said something to the effect of, ‘I’m the best in the world and I’ll fight anyone.’ And the entire stadium booed him. They just thought that was too arrogant. Like, you just won, why do you feel the need to brag about yourself? This was in Singapore, and I was surprised about that.”

“A big part of what drives the spirit of ONE Championship is really just the belief that martial arts makes the world a better place,” Cui said. “Of course want it to be successful business, of course we want to continue to grow in a successful business enterprise. That philosophy of we’re making the world a better place permeates throughout the entire organization. I think it’s something our fans really appreciate in Asia.”

What do you think of Victor Cui’s comments on Conor McGregor?