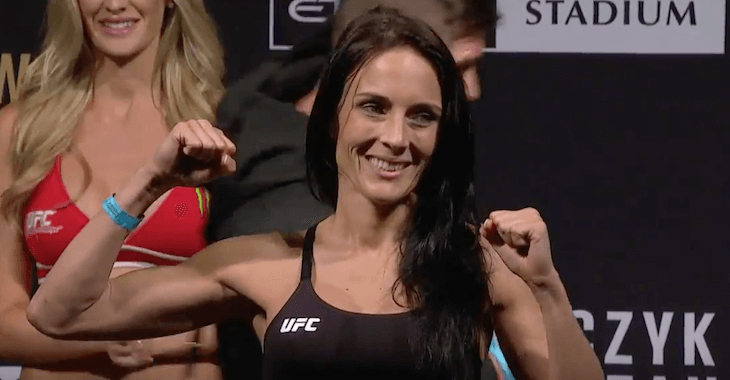 Unfortunately for Letourneau, in addition to losing the bout via 3rd round TKO, she also had a wardrobe malfunction that made headlines. The incident drew more criticism for Reebok, who has made numerous errors in apparel since their deal with the UFC.

She spoke on The MMA Hour about the incident:

“They told me in my championship fight [against Joanna Jedrzejczyk], they could see I was wearing another top under the official top. And they said, ‘you can wear something under but it needs to be behind under the official top.’ The official top is so low. Even if I wear something under, if you move the top a little bit it’s going to show my boobs. And all fight [against Calderwood] I was worried, I was pulling it, I was uncomfortable. And what happened was in the third [round], she literally pulled the three tops, and they went all the way down. I honestly thought that everybody saw my breasts until I could see my fight itself.”

“So my face, I wasn’t hurt at all when she gave me the front kick to the face,” she said. “And when I grabbed my chest, it wasn’t because I was hurt. It was just because I thought everybody saw my breasts. I was just very embarrassed. So that was one of the worst days I had. I don’t know what [Calderwood] told me, because we kind of spoke to me a little bit. She repeated something twice but I couldn’t understand what she was saying. So I just knew I needed to keep fighting. This isn’t something we should need to think about when we fight.”

The silver lining in the incident is that Reebok reached out to Letourneau for a meeting to address female wardrobe malfunctions, and hopefully offer more than one selection of sports bra for female fighters.