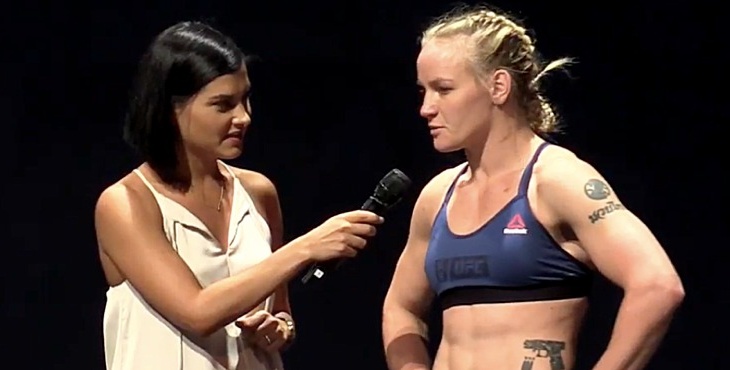 UFC 215 was the last event in which we saw top UFC Bantamweight contender, Valentina “Bullet” Shevchenko competing inside the octagon. In that bout standing across from her was the champion, Amanda Nunes, a familiar opponent to Shevchenko as the both competed prior to this meeting at UFC 196. Nunes came out on top on both occasions, the first time being a unanimous decision and the second time by a split. Since Shevchenko’s last bout, the UFC has installed a Flyweight division which is where Shevchenko now looks to take her skillset for the foreseeable future.

The UFC’s inaugural Flyweight champion, Nicco Montano has already commented saying she doesn’t think Shevchenko deserves the first crack at her title. And after a recent interview with ESPN’s Brett Okamoto, Shevchenko is okay with this.

“I’m not angry at all about any of this,” Shevchenko stated. “I know nothing can change. Not everything happens as we want or desire. It doesn’t matter. I’m a fighter, and I’m ready to fight every time.

To have an opportunity to fight for the title, you have to prove you deserve it against top opponents. To just say, ‘I have the next title shot,’ is not the right way. That’s why I said, ‘OK, Paige wants that, let’s do a fight.’ The information I have is she turned it down.

I’ve been in martial arts more than 20 years, I’ve seen fighters who barely have a professional fight say they’re the best in the world,” Shevchenko said. “I’ve seen many people use these words. At the end of the day, that doesn’t matter. What matters is when the door closes and everyone clearly sees who deserves or does not deserve something.

It doesn’t matter what Nicco says right now. When she feels good, we can come back to this discussion. Let’s see what is happening then.”