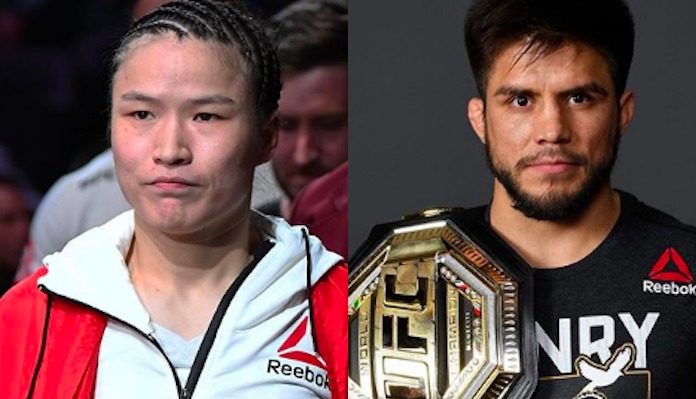 Zhang is the UFC’s new women’s strawweight champion after knocking out Jessica Andrade at UFC Shenzhen in 42-seconds. For Cejudo, he has been calling out a couple of different female fighters and the new Chinese champion just so happened to be one of them.

Now, Zhang has taken to Instagram to tell Cejudo to watch out at UFC 242 as they will both be in attendance.

“Tripple C, One Weili is coming to #UFC242 Abu Dhabi, you better hide or I’m taking your gold back to Beijing. #bendtheknee #rememberme #represented#grrrlarmy #zhangweili,” she wrote on Instagram.

After her title earning victory in China, Weili Zhang he asked if she would consider fighting Henry Cejudo. Zhang responded by saying Cejudo would need a sex change first.

“Yes, he can fight with me.” Zhang said. “But first, he need to go to Thailand and become, well… get a sex change. Then, I will welcome him or her to the female division.”

Henry Cejudo then replied with the following:

“Oh so you’re a comedian now too, Weili? Well just let me know when you are ready for some real competition and you too can bend the knee to Triple C! #intergenderchamp,” Cejudo posted in response to Zhang.

Weili Zhang, as mentioned, is coming off of a knockout win over Jessica Andrade to improve her to 20-1 and put her on a 20-fight winning streak. She is 4-0 in the UFC and her next title defense will reportedly take place in the United States

Henry Cejdudo, meanwhile, last fought back at UFC 238 where he beat Marlon Moraes to become the promotions new bantamweight champion. Since then, he has told several female fighters to ‘bend the knee’ like Valentina Shevchenko, Germaine de Randamie and now Weili Zhang.

Obviously this fight would almost certainly never happen, but the two continue to trade shots on social media.

What do you make of Weili Zhang’s comments towards Henry Cejudo? Sound off in the comment section, PENN Nation!