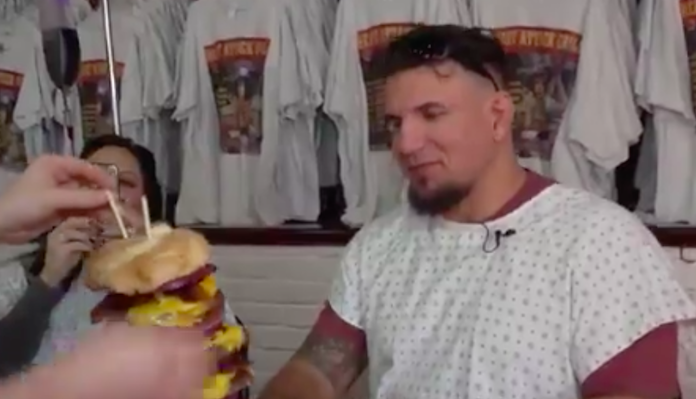 The former UFC and Bellator standout is a Las Vegas native and the Heart Attack Grill on Freemont Street is a world-famous restaurant known for its gigantic meals. Before stepping into the restaurant, you can stand on a scale outside the door and if you weigh more than 350lbs you get to eat for free.

Mir was challenged to eating a 20,000 calorie burger (it officially weighed in at 19,964 calories). It included eight patties, 16 slices of cheese, 40 pieces of bacon, two tomatoes, one onion, and one bun. It’s one of the biggest burgers you will ever see, but Mir was up for the challenge.

Take a look at the video of Mir attempting to eat the burger, via MMA Videos.

Mir (19-13) is currently a member of the Bellator heavyweight division and is coming off of a decision win over Roy Nelson which snapped a four-fight losing skid. Since signing with Bellator in 2018, Mir is just 1-2 with knockout losses to Fedor Emelianenko and Javy Ayala and the decision win over Nelson. Mir did not fight between 2016 and 2018 due to a positive drug test and subsequent suspension.

Now 40 years old, Mir is not the same fighter he once was, when in his prime he was the UFC heavyweight champion. But he proved with the win over Nelson that he can still get his hand raised. That being said, there’s no guarantee that he will fight again given his age. Maybe going out with the win over Nelson is the right way to end his potential UFC Hall of Fame career, but he may want to take another fight with Bellator at some point.

Do you think Frank Mir will fight again for Bellator and who do you think his next fight should be against?