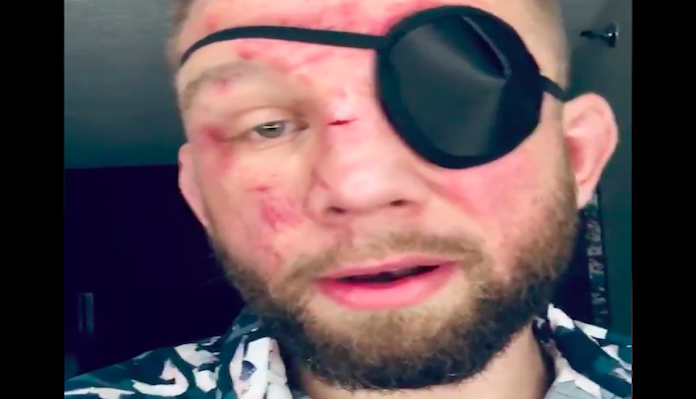 Former UFC fighter Nik Lentz posted a graphic video to his social media showing him removing his own stitches from above his eye.

Lentz recently announced his retirement from mixed martial arts following a split decision loss to Movsar Evloev on Fight Island. Lentz took more damage to his previously-injured eyes during the fight, prompting him to hang his gloves up. Of course, there was still the matter of the stitches that remained, and Lentz took care of it himself. The video might not be for everyone so viewer discretion is advised. In the video, you can see Lentz removing multiple stitches from above his right eye. Check out Lentz removing his stitches “Carnival style” below via his Twitter.

When Lentz announced his retirement last week, he did so due to the numerous eye injuries that he has suffered over his last two fights, with Evloev and Arnold Allen.

“They say don’t make rash decisions after a loss, but this one is not rash or even quick for that matter. The injury I suffered to my eyes last year was a career-ender. In total, I lost about 40% of my vision, but I wanted to see what one more hard-fought battle was like with the new eyes,” Lentz said at the time. “It was clear to me last night that it’s impossible for me to compete at this level anymore. I just can’t lock on to a moving target like I should, and with 40% of my vision practically gone… it’s chaotic to the least. My life as a fighter in the best organization on the planet ends here.”

Do you think Nik Lentz is completely done, or do you see him fighting again?