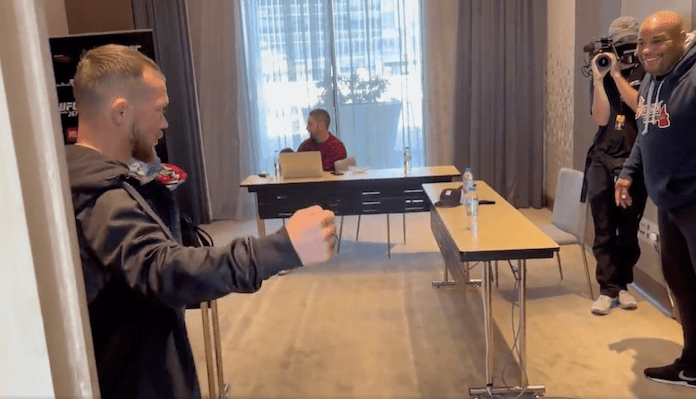 Yan was on Fight Island last month to fight Cory Sandhagen for the interim UFC bantamweight title. Ahead of the fight, Yan met with members of the UFC broadcast team including play-by-play announcer Jon Anik and color commentator Cormier. Yan was joking around with Cormier when he was asked to show him his best Dillashaw impression. Watch the impression of Dillashaw that Yan made, and see how much he made Cormier laugh.

Funny stuff from Yan, who showed once again at UFC 267 in his win over Sandhagen that he truly is one of the best pound-for-pound fighters in the sport. After losing the first round of the fight, Yan began to make adjustments going forward and won the following rounds to secure his place as the new interim UFC bantamweight champion of the world. By getting the interim belt, he now has a chance to fight UFC bantamweight champ Aljamain Sterling in 2022 for the undisputed title in what should be an incredible title unification bout.

In the meantime, Yan will continue to train and improve as he looks to forge ahead and get the chance to claim back the belt that he once owned before an illegal knee DQ loss cost him his title against Sterling earlier this year. That is so far in the past now, though, and Yan is likely just looking forward and ahead to the future at this point. He is a great fighter and he leveled up against Sandhagen when they fought, making him ultra dangerous. At this point, he has to be considered one of the top P4P fighters in the sport of MMA.

How excited are you to see Petr Yan and Aljamain Sterling face off in a rematch for the UFC bantamweight title in 2022?