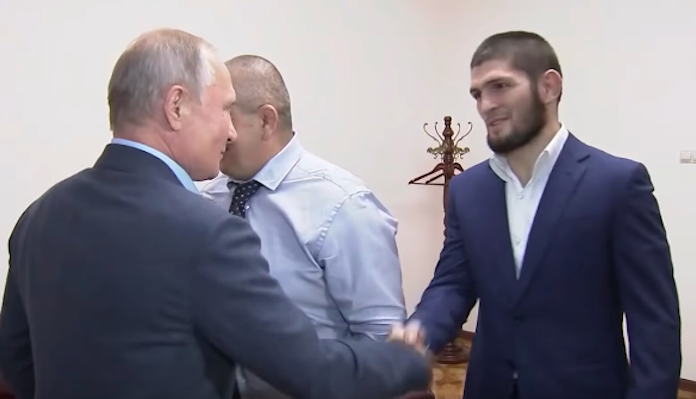 Khabib Nurmagomedov, a native of Dagestan, has become a massive star in larger Russia. So, what better way to celebrate his UFC 242 win than a meeting with Russian President Vladimir Putin.

At UFC 242, “The Eagle” once again delivered a dominant performance, this time against the lightweight interim champion, Dustin Poirier. He submitted Poirier during the third round. This huge win was celebrated by Russian fans who tuned in to watch the action on Saturday night.

Nurmagomedov sat down with the President, who congratulated him on his fighting success. He was joined by his father, Abdulmanap Nurmagomedov. Putin seemed his relaxed, and the pair showed a fellow camaraderie with a brief introductory hug.

Nurmagomedov and Putin met before, when the President congratulated Nurmagomedov on his win over Conor McGregor and discussed the infamous cage jump. Watch last year’s meeting, courtesy of The Sun:

Vladimir Putin has spoken highly of Khabib Nurmagomedov in the past. He is also an avid sportsman who exercises 2-3 hours every day. He enjoys hockey, swimming and hiking. Putin is also a Judo champion who has been training since the age of 11.

Nurmagomedov is hoping to bring Georges St Pierre out of retirement to put his undefeated record to the test in his next fight. That being said, Tony Ferguson is widely expected to get the next crack at the champ. Stay tuned for updates on that.