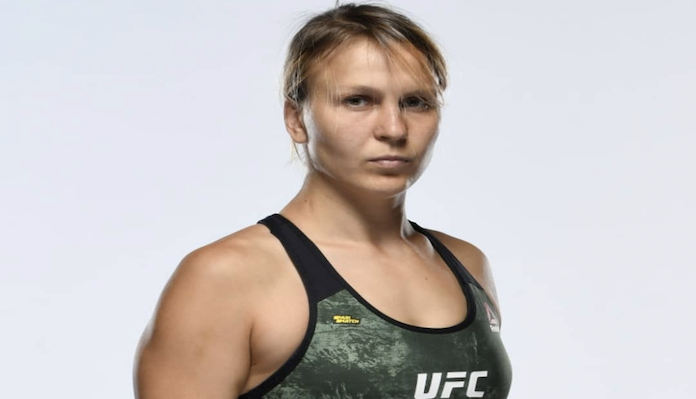 Stoliarenko is set to take on Julia Avila in a women’s bantamweight bout set for Saturday’s card. During the weigh-ins on Friday, Stoliarenko stepped onto the scale to weigh in. However, she fainted and needed to be helped by commission officials. A few minutes later, Stoliarenko got back onto the scale. She weighed in successfully at 135.5lbs but a few seconds later Stoliarenko collapsed for a second time. She was immediately given fluids to rehydrate with and a stretcher came to the scale to take her away for a medical check-up.

Was able to weigh in – 135.5 lbs but not stand after, scary site #UFCVegas22 pic.twitter.com/VhaBmZ9SWD

The UFC has not made an official announcement about whether or not this fight between Stoliarenko and Avila will go on as scheduled for Saturday night. Stoliarenko did make weight at 135.5lbs, but the fact she collapsed twice on the scale is extremely scary and worrisome. Commission officials typically err on the side of caution when fighters collapse during weigh-ins, so there is a good chance that this fight with Avila is getting scrapped.

Stoliarenko (9-4-2) is in her second stint in the UFC. The 27-year-old native of Lithuania is 0-2 overall in the UFC, with a split decision loss to Leah Letson during his first stint in the promotion back in 2018, and then a unanimous decision loss to Yana Kunitskaya in her second fight in the Octagon. Stoliarenko is the former Invicta FC women’s bantamweight champion and she is known for her toughness and for her armbar. It was hard to see her suffering so badly at the weigh-ins today and there is definitely a good chance that this fight won’t go on due to potential medical issues with Stoliarenko.

UPDATE: The UFC has canceled the fight between Julia Avila and Julija Stoliarenko, per Mike Heck.

Julia Avila vs. Julija Stoliarenko is officially off tomorrow night's card, per sources.