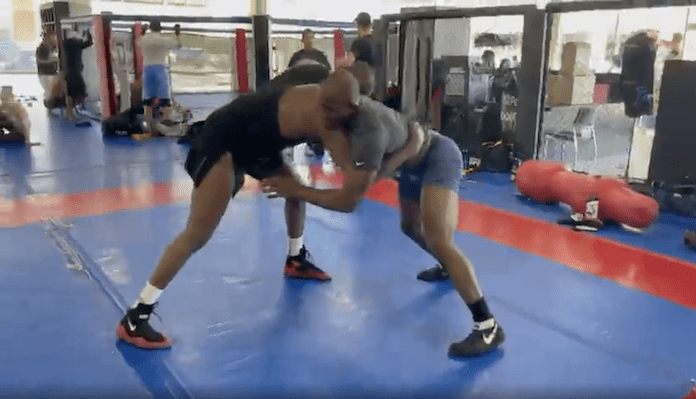 Jones was recently booted out of his longtime gym, Team Jackson-Wink in Albuquerque, New Mexico, after his coach John Winkeljohn kicked him out of the gym after a domestic battery incident with his partner in Las Vegas back in September. Initially, it was thought that Jones was going to make some serious changes in his life and then get back into the gym when both he and his former team felt like he was ready to come into the doors again.

But Jones was not willing to wait around to see what the team was going to do, and he decided to travel around and go to new gyms. One of the new gyms he visited recently is Fight Ready in Phoenix, Arizona, and Jones seems to be enjoying his time there as he has been posting photos and videos of his time there. On Saturday, Jones posted a video of him grappling with the Olympic wrestling champion Cox. Take a look at the video Jones posted.

Jon Jones: Sometimes you the hammer, sometimes you’re the nail. I’m humbled and grateful. Days like today will only make me better. Grateful to have the opportunity to work with some of the best athletes in the world @henry_cejudo @fightready @jmiz_cusa

Jones has competed his entire UFC career at 205lbs, but he is expected to make the move up to heavyweight when he does return to the Octagon. That looks like it is going to be in 2022, and Jones is making sure he keeps training hard in the meantime.

What do you think about this move by Jon Jones to go to Fight Ready in Arizona? Do you think we are going to see a new-and-improved Jones in 2022 in the heavyweight division?