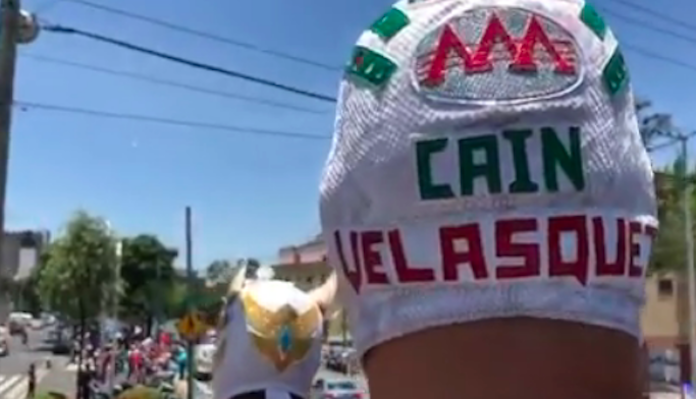 Former UFC heavyweight champion Cain Velasquez has touched down in Mexico for his pro wrestling debut, which will take place at Triplemania XXVII on Saturday. He has arrived in his ancestral homeland to the kind of fanfare and excitement befitting a king.

See Velasquez, decked out in a luchador mask, get swarmed by fans and parade around the streets in the videos below (posted to his official Instagram page).

“Huge reception and affection from all the fans of Triplemania XXVII,” Velasquez wrote, in Spanish, in the caption for this post.

At Triplemania XXVII, which goes down inside Mexico City Arena, Cain Velasquez will be teaming up with Cody and Psycho Clown to take on Texano Jr., Taurus and a yet unnamed mystery opponent.

This will be Velasquez’s first major appearance since a tough knockout loss to top heavyweight contender Francis Ngannou in the UFC’s Octagon earlier this year. Prior to this loss, the former heavyweight champion had not fought since UFC 200 in July of 2016, when he walloped Travis Browne to an impressive first-round TKO victory.

Cain Velasquez held the UFC heavyweight title twice. He first won it with an emphatic, first-round TKO of Brock Lesnar in 2010, but relinquished it to Junior dos Santos in his first defense in 2011, falling to a first-round punch. He then reclaimed the heavyweight title from dos Santos in December of 2012, and defended it against Antonio “Bigfoot” Silva and in a trilogy fight with dos Santos. He ultimately surrendered the title to Fabricio Werdum via submission in June of 2015 — coincidentally in Mexico City, the setting of his pro wrestling debut.

How do you think the former UFC heavyweight champion will perform in the pro wrestling ring this weekend? Join the conversation in the comments section below!