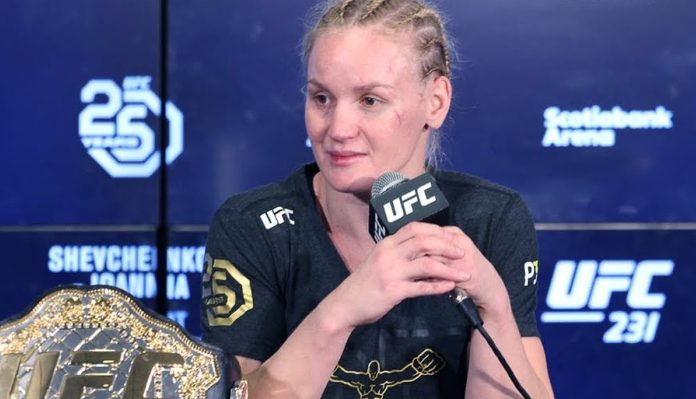 UFC champion Valentina Shevchenko has issued a warning to fellow flyweights who view her as beatable.

It was at UFC 275 this past weekend where Valentina Shevchenko (23-3 MMA) went up against Taila Santos (19-2 MMA) in the women’s flyweight co-main event.  It was to be Shevchenko narrowly defending her title via split decision. The champion’s late push was enough to secure her a win by scores of 48-47, 47-48 and 49-46.

It was to be ‘Bullet’s’ ninth win in a row, having not lost a fight since September 2017 when Amanda Nunes (21-5 MMA) managed to squeak out a win.

It was also Shevchenkos’ seventh consecutive defense of her UFC women’s flyweight championship.

Taila Santos came into UFC 275 on a 4 fight winning streak before losing to Shevchenko on June 11th in Kallang, Singapore. Santos had visible swelling around her eye at the start of Round 4 and it was determined after the fight that she will require surgery to repair a broken orbital bone.

By her post fight interview (h/t MMANews), Valentina Shevchenko is obviously assuring future opponents who may now think she is beatable – she is not.

Several fans and commentators alike believed it was Santos who should have been the victor at UFC 275.

Sean O’Malley weighed in on the ‘Timbo Sugarshow’ podcast saying:

“I thought Santos beat Valentina last night. Dude, she took her back, was holding her mouth shut for like, three different times. Valentina didn’t land anything that was that crazy besides that headbutt. Valentina lost that fight. Santos is champ.”

At a post fight interview, Daniel Cormier has this to say:

Do you believe, like Shevchenko that she is unbeatable? Or are you believing that Santos had that fight?