Tonight’s UFC Vegas 51 event is headlined by a welterweight rematch between Vicente Luque and Belal Muhammad.

Vicente Luque will enter tonight’s UFC Vegas 51 headliner sporting a four-fight winning streak, his latest being a submission victory over Michael Chiesa. All four of the Brazilian-American’s most recent wins have come via stoppage.

Meanwhile, Belal Muhammad was last seen in action this past December, where he scored a unanimous decision victory over Stephen Thompson to extend his undefeated streak to seven fights in a row. 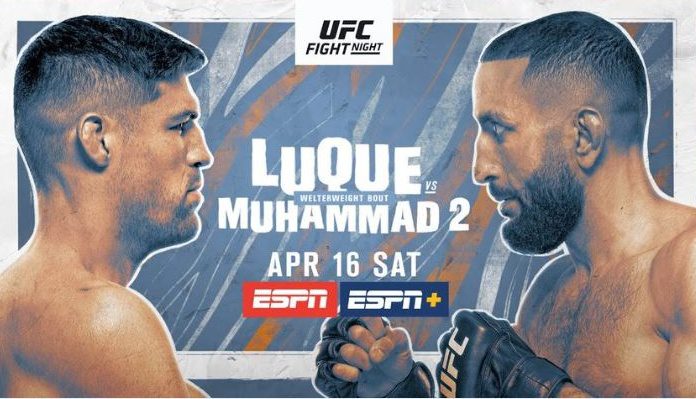 Tonight’s UFC Vegas 51 main event begins and Vicente Luque comes forward quickly with a jab. He lands a nice one up the middle and Belal Muhammad circles out. ‘Remember the Name’ looks for a takedown attempt but it is not there. Another jab lands for Luque. Muhammad responds with a right hand over the top. ‘The Silent Assassin’ lands a low kick. Belal replies with a combination. Vicente eats that and just continues to come forward. He continues to pepper the lead leg of Muhammad. Both men with punches in the pocket. Belal Muhammad circles to his left and then shoots in and lands a big takedown. He lands in full guard and begins working some punches to the body. He postures up and rains down a couple of good shots on Vicente Luque. The Brazilian looks to shrimp and scramble. He does, but Muhmmad takes his back. Luque escapes and is now back on his feet. He pushes Belal against the cage and lands a knee. The fighters break and Vicente is back on the hunt. The horn sounds to end round one.

Round two of the UFC Vegas 51 main event begins and Vicente Luque comes forward quickly with pressure. He lands a left hand and then misses with a right. Belal Muhammad fires back with a jab. Luque with a low kick. He lands another. ‘Remember the Name’ with a nice combination. Luque stays on him and lands a left hook. A low kick from ‘The Silent Assassin’ but Belal counters nicely with a right hand. Another low kick counter right sequence. The welterweight fighters trade kicks and then Muhammad circles out. Belal feints with a right hand and then shoots for a takedown and gets it. He begins working from the full guard of Vicente Luque. One minute remains in round two. The Brazilian-American scrambles and is able to get back to his feet. Muhammad hits him with a body kick. The horn sounds to end round two.

Round three of the UFC Vegas 51 main event begins and Luque’s corner told him between rounds that he needs to win this next five minutes. He comes forward and lands a big punch and then an uppercut. That appeared to stagger Muhammad. He circles out and Luque connects with a body kick. He follows that up with a left hook. Belal responds with an elbow and then shoots in for a takedown. Vicente Luque is able to break free and he immediately lands a short left hook. He follows that up with another. A big low kick now from ‘The Silent Assassin’. Muhammad shoots in and scores another big takedown. Two minutes remain in the round. Luque battles and is able to scramble his way back to his feet. Just over a minute remains in round three. Belal Muhammad with a spinning back elbow attempt. Vicente Luque replies with a nice left hook and then a combination. Belal counters with a right hand but his opponent continues to press forward. Luque misses with a knee up the middle. He leaps in with a flying knee and the horn sounds to end round three.

Round four of the UFC Vegas 51 headline begins and Vicente Luque is quickly back to work with combinations. He lands a hard low kick. Belal Muhammad counters with a straight right. Another low kick now from Vicente. He attempts another but winds up getting taken down. Muhammad working from the full guard. Three minutes remain in the round. Luque is attempting to shrimp and get back to his feet. Belal grabs a hold of an arm triangle. Luque scrambles and is back up to his feet. He immediately throws a big left. Belal answers with a straight right. Vicente with a low kick. Belal lands a one-two. Luque with another low kick but Muhammad answers right back with a counter. Another right hand form Luque and then another as the horn sounds to end round four.

The fifth and final round of the UFC Vegas 51 main event begins and Vicente Luque’s corner told him he’s tied 2-2 (not sure about that assessment). He comes out pressing forward and lands a combination. Belal shoots for a takedown attempt but it is not there. Another good combination lands for Luque. Once again Muhammad shoots but he is not able to get the fight to the floor. He circles out and then shoots again. This time Luque grabs a hold of his neck. Muhammad breaks free and then shoots in for another takedown. This time he gets it. Luque is quickly on the move to get back to his feet. He does but Belal is still draped all over him. One minute remains now. Belal Muhammad drops for a double leg. Vicente Luque is able to defend and then breaks free. He looks to come forward but eats a combination.

Who would you like to see Muhammad fight next following his victory over Luque this evening in Las Vegas?

This article appeared first on BJPENN.COM
Previous articleJesse Ronson reacts following loss to Rafa Garcia at UFC Vegas 51: “I probably could of got the DQ but I ain’t no bitch”
Next articlePros react after Belal Muhammad defeats Vicente Luque at UFC Vegas 51
© Newspaper WordPress Theme by TagDiv