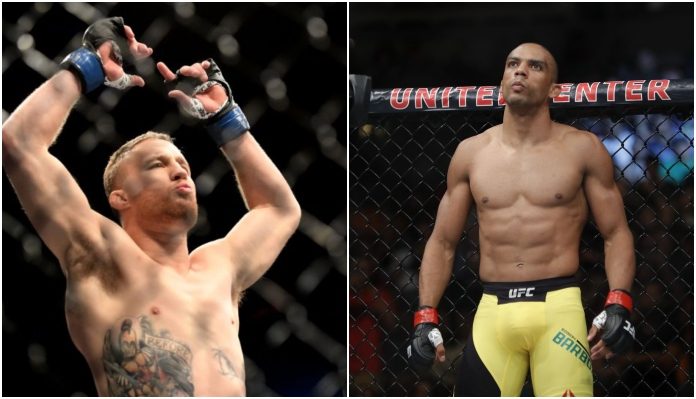 The octagon returns to Pennsylvania this evening for UFC Philadelphia, a thirteen-bout fight card headlined by a lightweight scrap between Edson Barboza and Justin Gaethje.

The former World Series of Fighting lightweight champion, Gaethje, will be looking to build off the momentum of his first-round knockout victory over James Vick this past August in Lincoln.

Meanwhile, Edson Barboza was last seen in action at December’s UFC event in Milwaukee, where he scored a third-round TKO victory over Dan Hooker.

In tonight’s co-main event middleweight standouts David Branch and Jack Hermansson will square off in hopes of moving up the 185-pound ranks.

As for Jack Hermansson, “The Joker” is coming off back-to-back stoppage victories over opponents Thales Leites and Gerald Meerschaert.

If that wasn’t enough to get you interested, tonight’s UFC Philadelphia event also features a featherweight fight between Michael Johnson and Josh Emmett, as well as a strawweight bout between fan favorites Karolina Kowalkiewicz and Michelle Waterson.

Get all of tonight’s UFC Philadelphia live results and event highlights below:

Edson Barboza vs. Justin Gaethje – Gaethje def. Barboza via KO (Punch) at 2:30 of Round 1
David Branch vs. Jack Hermansson – Hermansson def. Branch via submission (guillotine) at 0:49 of Round 1
Josh Emmett vs. Michael Johnson – Emmett def. Johnson via KO (punch) at 4:14 of Round 3
Karolina Kowalkiewicz vs. Michelle Waterson – Waterson def. Kowalkiewicz via unanimous decision (30-27 x3)
Paul Craig vs. Kennedy Nzechukwu – Craig def. Nzechukwu via submission (triangle choke) at 4:20 of Round 3

Who are you picking to win tonight’s UFC Philadelphia headliner between Justin Gaethje and Edson Barboza? Sound off in the comments section PENN Nation!