The Octagon returns to Arizona for tonight’s UFC 263 event, a fourteen-bout fight card headlined by a rematch between Israel Adesanya and Marvin Vettori.

Adesanya (20-1 MMA) and Vettori (17-4-1 MMA) originally collided in April of 2018, with the promotions reigning middleweight champion emerging victorious by way of split decision.

Since then ‘The Italian Dream’ has gone on to win five fights in a row, his latest being a dominant decision victory over Kevin Holland.

Meanwhile, Israel Adesanya will enter UFC 263 looking to rebound from the first loss of his professional MMA career. ‘Stylebender’ had his ambitions of becoming a champ-champ halted by Jan Blachowicz at UFC 259 back in March. Prior to that setback, the middleweight champion had reeled off two title defenses over opponents Yoel Romero and Paulo Costa.

UFC 263 will be co-headlined by a highly anticipated men’s flyweight title fight rematch between Deiveson Figueiredo and Brandon Moreno.

Figueiredo (20-1-1 MMA) had captured the promotions vacant flyweight title in July of 2020, this after defeating Joseph Benavidez by way of technical submission. He would go on to earn his first career title defense at UFC 255, scoring a first round stoppage win over Alex Perez.

Meanwhile, Brandon Moreno (18-5-2 MM) had earned his first crack at the UFC’s flyweight title after putting together a three-fight win streak. During that impressive stretch the Mexican standout had scored wins over Kai Kara-France, Jussier Formiga and Brandon Royval.

If that wasn’t enough to get you interested, UFC 263 also features a five-round welterweight bout between Nate Diaz and Leon Edwards. 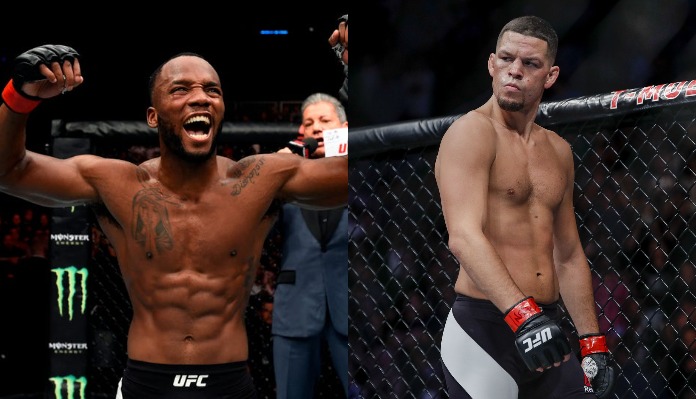 Diaz (20-12 MMA) will be returning to action for the first time since suffering a TKO loss to Jorge Masvidal in November of 2019. Prior to that setback, ‘The Stockton Slugger’ was coming off of a unanimous decision victory over former lightweight title holder Anthony Pettis.

As for Leon Edwards (18-3 MMA), the Birmingham native most recently took to the Octagon in March, where his bout with Belal Muhammad resulted in a no-contest due to a nasty accidental eye poke. Prior to that unfortunate result, ‘Rocky’ had put together an eight-fight win streak, which included victories over Rafael dos Anjos, Donald Cerrone and Gunnar Nelson.

Paul Craig vs. Jamahal Hill – Craig def. Hill via TKO (arm break and elbows) in Round 1

Ya Boi POURING IT ON to end RD 3️⃣@ErykAnders #UFC263 pic.twitter.com/cCtPsNRzqU

Terrance McKinney vs. Matt Frevola – McKinney def. Frevola via KO at :07 of Round 1

Who are you picking to win tonight’s UFC 263 fights in Arizona? Share your predictions in the comment section PENN Nation!