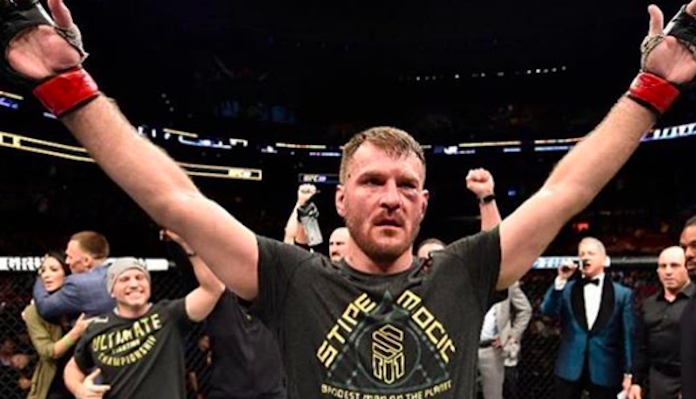 RT if you're nervous 😅

Round one of the UFC 252 main event begins and Stipe Miocic starts things off with a pair of low kicks. Another low kick from the champ. Cormier shoots in for a single leg. He doesn’t get that takedown but grabs a hold of Stipe’s head and lands a knee. Miocic breaks free and lands a jab followed by a right to the body. Daniel Cormier is looking to find a way inside but eats a 1-2 combination for his efforts. Stipe with a right hand but ‘DC’ counters with a better right hand over the top. A jab from Miocic and Cormier answers with a poke to the eye. ‘DC’ with a low kick upon the restart. He follows that up with a pair of right hands. The fighters clinch and Cormier lands another good right. Round one comes to an end.

Round two of the UFC 252 main event begins and Miocic lands a leaping jab. Daniel Cormier comes forward with a three-punch combination. Stipe Miocic ducks to avoid the shots and circles out. Cormier with a pair of low kicks. Miocic pushes forward but ‘DC’ keeps him at bay with a right hand. Good low kicks from both men. A right hand lands for Miocic followed by a left to the body. ‘DC’ leaps in with a left hook. Stipe connects with a jab and then a kick to the body. Cormier responds with a combination of his own that ends in a low kick. Stipe with a big right hand and then another and Cormier is down. Miocic takes top position but can’t get off much damage before the horn.

Round three of the UFC 252 headliner begins and Stipe Miocic starts with a 1-2 combination. He attempts a high kick and starts stepping into the pocket behind right hands. ‘DC’ counters with a pair of hook. Stipe continues to press the action and walk down Daniel Cormier with strikes. The champion forces the clinch and delivers to hard knees to the body of Cormier. ‘DC’ breaks free from the cage and circles out. Stipe Miocic comes forward and lands another clean combination. He forces Cormier back against the cage and lands a pair of knees followed by some hooks. Round three comes to an end.

Round four of the UFC 252 main event begins and Daniel Cormier’s left eye is nearly closed due to an accidental eye poke at the end of round three. Stipe Miocic immediately capitalizes with a hard combination. Low kicks from both men. Another hard kick lands for ‘DC’. He follows that up with a right hand and Miocic forces the clinch. ‘DC’ with a nice hook and Miocic answers with an uppercut. Both men with big right hands now. They switch to jabs and once again Stipe Miocic decides to force the clinch. Cormier breaks free and lands a 1-2 combo to close out round four.

The fifth and final round of the UFC 252 main event begins and Stipe Miocic begins landing early. Daniel Cormier decides to force the clinch and pushes the Ohio native against the cage. Miocic quickly reverses the position. The fighters break and Cormier lands a right hand. Miocic answers with a low kick and then a body kick. ‘DC’ attempting to push the pace now, but Miocic answers with a pair of right hands. These boys are leaving it all in there tonight. The fighters clinch up again and Stipe Miocic lands a pair of knees. Daniel Cormier replies with a right hook. Miocic pushes ‘DC’ against the cage. He backs off and lands a combination. Stipe with a right hand and then shoots for a takedown. Cormier stuffs the attempt and grabs a head lock. The horn sounds to spell and end to this trilogy bout.

EVERY PUNCH ON THE EDGE OF OUR SEATS!

Who would you like to see Miocic fight next following his decision victory over Cormier this evening in Las Vegas? Share your thoughts in the comments section PENN Nation!