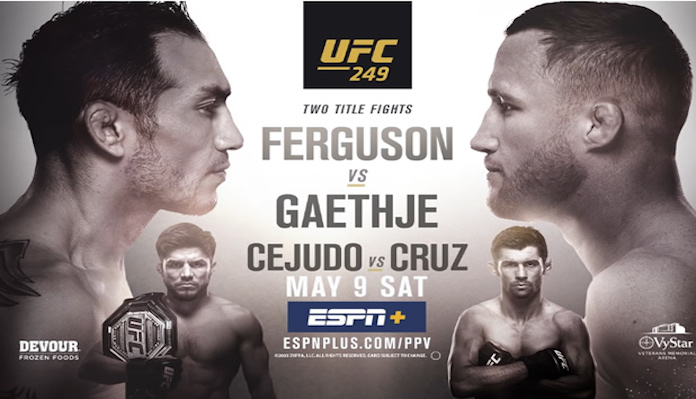 The updated safety protocols for UFC 249 during the coronavirus pandemic include a policy of no post-fight interviews in the Octagon.

The eagerly anticipated UFC 249 fight card was inked for April 18 but was postponed due to the pandemic. Not one to be defeated, UFC president Dana White rescheduled the event for May 9.

The organization was forced to introduce drastic safety measures to address concerns over live sporting events. According to UFC executive Craig Borsari, there will be many changes at UFC 249 which will be noticeable for fans watching at home.

Borsari explained to ESPN that the broadcast team will be sitting at separate tables away from each other. Also, post-fight interviews will not take place in the Octagon and crew members will be required to wear personal protective equipment such as masks and gloves. Officials will also be on hand to sanitize the cage in between fights.

“A lot of the work we’re doing will be taking place behind the camera,” Borsari said. “Some of it will take place on camera. But we’ll try to create the UFC product that we’ve done for years and years now and bring that to people in their homes so they can have a bit of an escape here for at least a few hours.”

Joe Rogan, Daniel Cormier and Jon Anik will make up the UFC 249 broadcast team. On the Saturday night fight card, the winning fighter will be ushered to an isolated area with a sanitized headset. Rogan will then interview from a separate location near the Octagon.

Because there will be no crowd in attendance, there will be a noticeable reduction in sound which Borsari explained may be appreciated by fans watching at home.

“For fight fans, I think some of them maybe even prefer being able to hear corner audio a little clearer because you’re not combating that with 20,000 people screaming,” Borsari said. “Hearing some of that instruction for a true, avid fight fan can be really interesting. It can offer some insights you wouldn’t typically get. We’ll look for the opportunity to leverage that when we can.”

According to Borsari, all fighters will receive COVID-19 tests, but the UFC is yet to announce what protocol will happen if an athlete tests positive.

“We were in a position where it wasn’t difficult for us to procure the right amount of tests to keep everybody safe,” Borsari said. “We also have Dr. [Jeffrey] Davidson, who is kind of overseeing exactly how they’ll be administered and the protocols to get results and clear people to get a clean bill of health to continue to work.”

There are also several safety protocols introduced that will affect weight cutting, the weigh-ins themselves, and the fighter’s stay at a host hotel in preparation for the event.

Will you be watching UFC 249 this Saturday?