The octagon returns to Toronto, Ontario, Canada this evening for the promotions stacked UFC 231 pay-per-view event.

Max Holloway has not competed since UFC 218 in December of 2017, where he defeated former division kingpin Jose Aldo for a second time by way of TKO.

In the co-main event of the evening, former women’s bantamweight title challenger Valentina Shevchenko will square off with former strawweight queen Joanna Jedrzejczyk for the promotions vacant flyweight title. 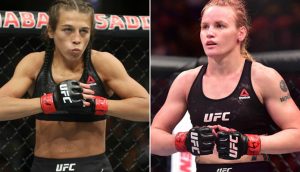 Shevchenko made her flyweight debut in February, scoring a very lopsided submission victory over Priscila Cachoeira.

As for Joanna, the former strawweight champion was last seen in action at July’s UFC on FOX event in Calgary. That night the Polish superstar earned a unanimous decision victory over Tecia Torres.

Valentina and Joanna have met three times in the past, all occurring under the Muay Thai rule set. Shevchenko emerged victorious in all three of those aforementioned contests.

Get all of tonight’s UFC 231 results below.