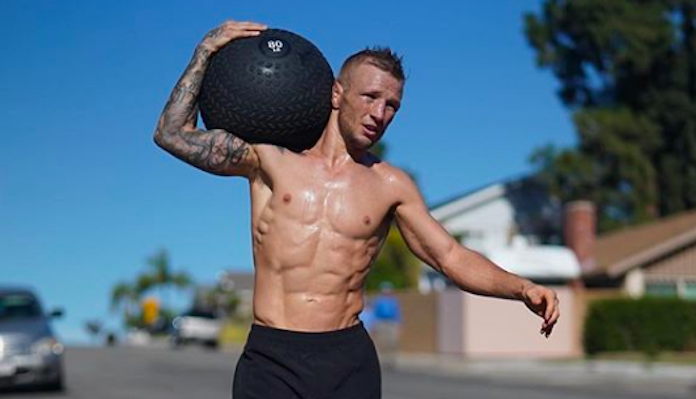 TJ Dillashaw will only be out three months after having knee surgery.

In Dillashaw’s return fight against Cory Sandhagen, he appeared to hurt his knee in the first round. It threw off his footwork but he still hung in the fight and ended up winning a split decision. However, Dillashaw knew his knee was injured and on Thursday underwent successful surgery.

“I had a medial meniscus bucket handle tear, a lateral meniscus tear, and a PCL tear,” Dillashaw told Brendan Schaub this past Saturday during “UFC 265 Calabasas Fight Companion” (via MMAJunkie). “I’m just glad it wasn’t ACL. I’m happy with the results because it would’ve been nine months (if it would’ve been an ACL tear). I’m looking at a three-month recovery right now until I get back to training, (then) fight for the title at the beginning of next year.”

TJ Dillashaw also says he’s surprised Sandhagen never heard or felt his knee pop. He says it made a sound and he knew his knee was messed up. Yet, he knew he had to push through to get the win.

Although it is good news he never tore his ACL, it’s no doubt disappointing for Dillashaw to suffer another injury. However, he will have time to recover before his next fight.

“So it was the last 30 seconds of the round, and I was in like a lazy leglock,” Dillashaw recalled. “We were in the 50/50 position, and I was completely out of it, but I was chilling. I knew I won the round, so I was going to sit up top and let the round finish out, but then he turned and started punching me. So I was like, ‘All right, b*tch,’ and I started hitting him back for my own ground-and-pound. I came in hard on my own leg and started ground-and-pounding, and we got into a scramble.

“He tried to get up on his feet, and I went to sit up on top, so I leaned my chest over my own body, and at the same time my LCL just went, ‘pow.’ It was loud, dude,” Dillashaw concluded. “I’m surprised he didn’t hear it or feel it because I heard it when it happened. As soon as the round was over, I sat down and I said, ‘My knee is f*cked.’ They bleeped it out because it’s ESPN.”

As Dillashaw says, the plan is to recover and fight for the belt next time out. Aljamain Sterling is set to rematch at Petr Yan at UFC 267 in October where the winner will likely face Dillashaw sometime in 2022.

Do you think TJ Dillashaw should fight for the belt next time out?