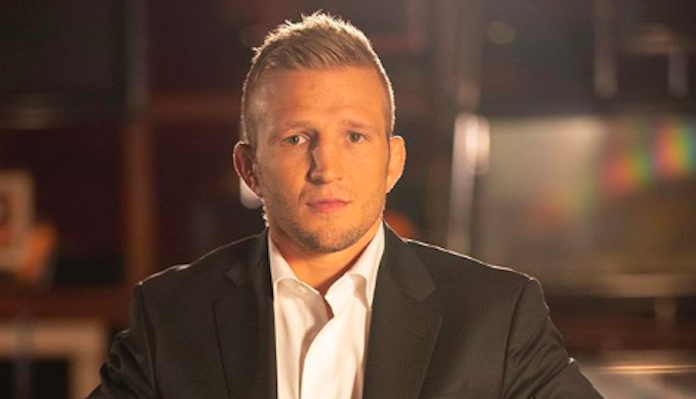 TJ Dillashaw was looking to become the fourth fighters in UFC history to earn “champ champ” status this past weekend in Brooklyn.

Unfortunatley for fans of “Killashaw“, things did not go as planned in his flyweight title fight with Henry Cejudo.

The former Olympic gold medalist, Cejudo, was able to drop Dillashaw on multiple occasions in the opening seconds of the fight, which ultimately culminated in a 32-second TKO victory.

It was a shocking loss, and the current bantamweight kingpin was less than impressed by the referees stoppage in the fight.

Dillashaw called the stoppage “bullsh*t”, a statement which was later echoed by UFC President Dana White.

Now days removed from the loss, TJ Dillashaw is beginning to digest the setback, but claims it is still very hard to swallow.

“Obviously I was furious. It was, I mean a 30 second fight when I know I’m the better fighter. It’s just rough to swallow. If anybody’s been in my situation or just competing in general, you know what that’s like,” Dillashaw told ESPN (transcribed by MMA Mania). “If we fight that fight 100 times I will win 99 of them. This, unfortunately, was that one fight. I’m not going to swallow this one very well. It’s a tough one for me, I was very serious of that. Especially when I have the UFC doctors telling me it’s an early stoppage. You had Dana White talking about it was an early stoppage. It just sucks man. There’s no other way to really put it.”

“Let’s be honest, I’ve never said I wasn’t a sore loser,” Dillashaw stated. “I don’t take losing very well. That’s not a guess about me. I let my emotions get the best of me, that’s why I’m so competitive and that’s why I am who I am. That’s why I put that many hours into the gym and train as hard as I do. Even in practice I get pissed when I lose. You know? I’ve been known for that. My emotions get the best of me.”

Do you think we will see an immediate rematch between TJ Dillashaw and Henry Cejudo next? Sound off PENN Nation!