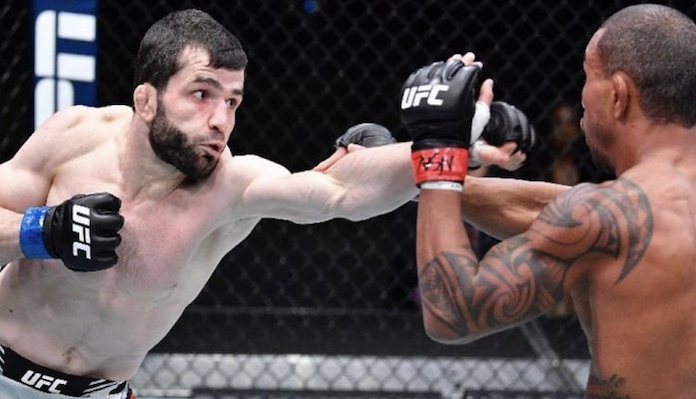 UFC bantamweight Timur Valiev reacted after receiving his first-ever UFC bonus, saying that he plans to buy a house for his mother.

Valiev won a majority decision over Barcelos in a wild, back-and-forth fight that saw the Russian and the Brazilain take home “Fight of the Night” for their all-out war. Valiev took the first round with more volume on the feet, but Barcelos dropped him twice in the second round and appeared to be on his way to knocking Valiev out, though he somehow made it to the end of the round. At that point, Barcelos had expended most of the gas in his tank, and Valiev was able to outstrike Barcelos in the third round to win a majority decision.

Following the card, the UFC announced that Valiev and Barcelos were each rewarded with $50,000 for their war, and Valiev took to his social media to explain exactly how much that bonus money means to him, revealing that he plans on buying a house for his mother.

I am so happy to won my first @ufc bonus. Now I am gonna buy house for my mother. Dream come true

Valiev improved to 18-2, 1 NC with the win over Barcelos, which includes a 2-0, 1 NC record in the UFC with the decision wins over Barcelos and Martin Day and a No Contest against Trevin Jones. After taking out Barcelos in this fight, look for Valiev to fight someone in the top-15 the next time he steps into the Octagon. He’s clearly a very talented fighter and by beating someone as talented as Barcelos is, it’s proof that Valiev is due for a step up in competition after picking up the biggest win of his MMA career to date on Saturday.

Who do you want to see Timur Valiev fight next after beating Raoni Barcelos in the “Fight of the Night” at UFC Vegas 30?