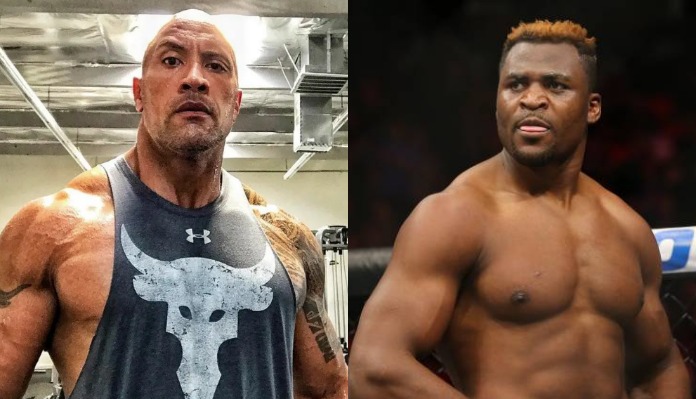 During a recent Q&A on Instagram, pro wrestling legend and Hollywood superstar Dwayne “The Rock” Johnson had an interesting interaction with UFC heavyweight contender Francis Ngannou.

Ngannou joined the Q&A and named Johnson as one of of his inspirations. He also asked the star to join him in the gym. Johnson responded affirmatively and heaped praise on Ngannou for his skill.

“Francis Ngannou, let me tell you something, brother – you ain’t ready for me,” Johnson joked (via MMA News). “I respect and love this guy so much. He is one of the top heavyweights in MMA, and in the world, and he is a dominant beast of a man. I can’t wait to see him fight again.

“I’ve been following your career, Francis, so thank you for saying that, saying that I was your inspiration,” Johnson added. “I wish you nothing but the best. I hear really cool things about you, and I look forward to seeing you and seeing you fight again.”

This comment from Johnson got a quick response from Ngannou, who thanked him for the kind words and motivation, and laid out plans for training and drinks when the coronavirus pandemic subsides.

Thank you @TheRock for your kind words. You give us all real motivation. Let’s train together and have some @Teremana tequila after. 🥃 pic.twitter.com/gRqfEbI51V

“Thank you @TheRock for your kind words. You give us all real motivation. Let’s train together and have some @Teremana tequila after.” Francis Ngannou to Dwayne “The Rock” Johnson on Twitter.

During the same Q&A session, Johnson also sent a warm message to the rest of the UFC roster, urging fighters to use their time in quarantine to work on themselves however they choose.

“To all the fighters in the UFC, MMA, and around the world – specifically the UFC because I’ve been really following them closely, Dana White and I are very good buddies – I feel for you guys not being able to fight,” Johnson stated. “But soon enough, there’s a silver lining in this.

“Maybe it’s your training, maybe it’s your mental capacity that you could expand right now as you guys aren’t allowed in the cage as you’ve been shut down, but there is some silver lining in all of this and I hope you guys find it. Because when you come back, the velocity in which you guys come back, I expect to see some dynamite fights when you come back in the cage and I can’t wait. The moment I can be there, I’m going to be there cage side.”

What do you think of this back-and-forth between Dwayne “The Rock” Johnson and Francis Ngannou?