Hot on the heels of his epic knockout win against Greg Hardy at UFC 264, Tai Tuivasa looks to have his next fight booked against Walt Harris at UFC 267.

According to MMAJunkie, the two heavyweights are set to go toe-to-toe on October 30th in Abu Dhabi in what will be an important match-up for the division.

Despite riding a three-fight losing streak, Harris is currently ranked at #12. ‘The Big Ticket’ has endured a tough run of form in the last couple of years, and was finished on all three occasions.

The 38-year-old’s spate of disappointing results began with a TKO loss to Alistair Overeem in the main event at UFC Fight Night Jacksonville in May 2020. He can count himself a touch unlucky with how the bout went. He came close to finishing ‘the Reem’ in the first round.

Before the downturn, Harris had strung together an impressive string of results. Between 2018-19, he secured a hat-trick of stoppage wins over Daniel Spitz, Sergey Spivak and Aleksei Oleinik. 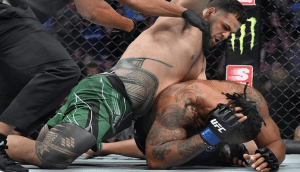 In contrast, Tuivasa’s recent performances have been the total opposite. According to reports, the flamboyant Aussie was almost cut from the UFC at one stage. Those rumours came around on the heels of three successive defeats.

However, the former rugby league player has returned to winning ways in emphatic fashion. Despite still being ranked outside the top-15, the 28 year old has amassed an explosive highlight reel of three successive victories. All of which, have come via knockout.

His last was arguably his most impressive. It took ‘Bam Bam’ just 67 seconds to put Greg Hardy’s lights out. With undeniable knockout power, memorable walkouts and of course – the infamous shoeys, Tuivasa is a fighter with obvious star potential.

If he can continue his run against Harris, a place in the top 15 awaits and, invariably, more big-name clashes.

The Sydney-native appears to have been putting the work in to improve his all-round game. He spent time training with Daniel Cormier at AKA ahead of his win over Harry Hunsucker and appears to have found a perfect home in which to sharpen his skills.

Will he continue his fine form against Harris at UFC 267?

This article appeared first on BJPENN.COM
Previous articleOscar De La Hoya expects him and Vitor Belfort will “f*****g beat the s**t out of each other”
Next articleTatiana Suarez out of UFC 266 return, ‘I still can’t believe this is my reality’
© Newspaper WordPress Theme by TagDiv