Is this the end of the road for the king of the shoeys?

Asked if he’d been cut by a fan on social media, the 10-3 heavyweight replied ‘yeah’ with a sad face emoji. 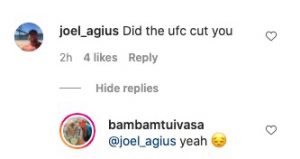 Currently riding a 3-fight losing streak, the 27-year-old’s UFC career began with fireworks after he dispatched Rashad Coulter with a flying knee in the first round at UFC Fight Night 121: Werdum vs Tybura.

He followed up with another fast-finish over Rashad Coulter before edging a 3-round war with Andrei Arlovski.

With massive KO-power, charisma and a penchant for drinking beer out of people’s shoes, the Australian quickly became a fan-favourite.

Despite the dip in form, some fans will be surprised to see him go.

So is there hope that this is all some kind of ruse?

When asked about it on Twitter, his manager, Zen Ginnen said ‘first i’ve heard lol.’

We’ve certainly seen plenty of fighters get cut for stringing together losses in the past, but Tuivasa is one who looked like he had a big future in the division.

He’d shown tremendous ability to put his opponents away early, and the Arlovski win showed he could grind, too. 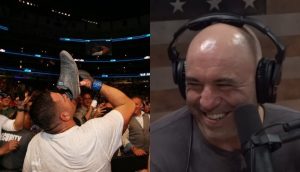 It was his next fight where things started to slip, as he was outclassed by former champion Junior Dos Santos.

This was his first time headlining a UFC card and he looked all at sea when the fight went to the ground.

He then dropped a Unanimous Decision to Blagoy Ivanov before being submitted by Sergey Spivek at UFC 243.

Given his popularity and potential, should he be given the chance to turn things around?

He’s certainly known to enjoy a bit of banter, and with his manager professing to have no knowledge of his client’s dismissal, perhaps we haven’t seen the last of ‘Bam Bam’ after all…