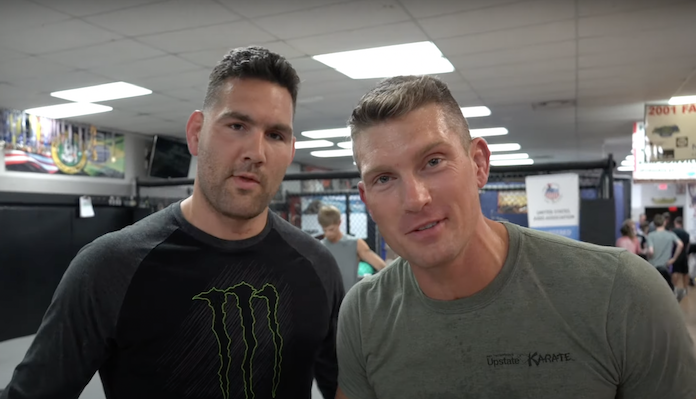 UFC welterweight contender Stephen Thompson is confident that his brother-in-law Chris Weidman will fight in the UFC Octagon once again.

Thompson was in the corner of Weidman last weekend at UFC 261 when he suffered one of the worst injuries we have ever seen in the history of the sport when Weidman broke his leg on a checked kick against Uriah Hall. Immediately after throwing the kick, Weidman’s leg snapped in half and he went down to the mat right away. Weidman was rushed to hospital and had surgery on his leg and is expected to make a full recovery. However, he is unable to walk at the moment and won’t be able to start training hard for 6-12 months.

Speaking to TMZ Sports, Thompson spoke about his brother-in-law Weidman in glowing fashion, and said that if anyone can come back from this injury, it’s “The All American.”

“When I first started training with Chris Weidman, this was before he was the champion, and I realized when he got the title why he was the champion. The grind that he puts himself through, the mental toughness, the spiritual toughness that this guy has, it’s unbreakable man, it really is. So knowing that about him, I know for a fact he will come back,” Thompson said.

“Wonderboy” said that for a striker like himself, breaking his leg might be the end of his career. But for a wrestler like Weidman, Thompson believes he can adapt to it.

“His style of fighting — if that ever happened to me, it would be different cause I rely a lot on my kicks. He can never throw a kick again and still dominate in the UFC, in his division. He’s not known for his kicking, he’s known for his striking, his wrestling. So that’s the thing that makes this not very worrisome. So yeah, it’s terrible that it happened and I pray that it heals up fast and I know it will, but he doesn’t have to ever throw a kick again and he can still win fights,” Thompson said.

Do you agree with Stephen Thompson that Chris Weidman will fight in the UFC again?