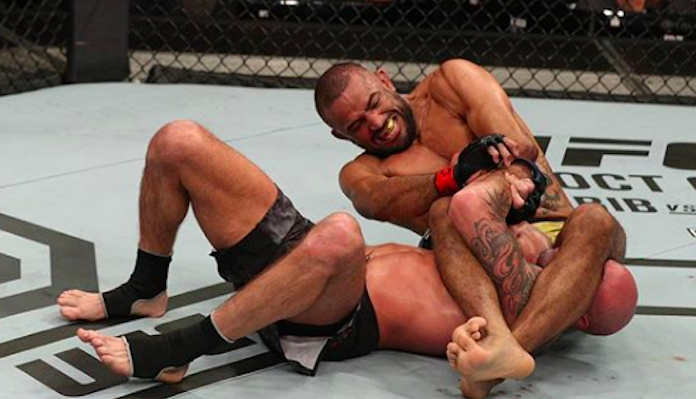 The UFC has cut 11 more fighters from its roster, including popular Brazilian welterweight Sergio Moraes, in the latest attempt to trim its list of talent.

The UFC last month cut 12 fighters from its roster, including highly-regarded welterweight Curtis Millender, and the purge continues today with the announcement that 11 more have been purged from the roster. MMAjunkie.com’s Nolan King confirmed the following cuts.

By far the most popular and notable fighter to be released on this list, Moraes competed on the first season of TUF Brazil in 2012 and was a staple of the welterweight division for the last eight years. He defeated the likes of Tim Means, Ben Saunders, Davi Ramos, Zak Ottow, Omari Akhmedov, Mickael Lebout, Neil Magny and Renee Forte in the UFC. His losses came against James Krause, Warlley Alves, Anthony Rocco Martin, Kamaru Usman, and Cezar Ferreira, with a draw against Luan Chagas. He is 37 years old now and may opt to retire. But if he sticks around, he could return to Bellator, where he competed back in 2009.

Ottow defeated Dwight Grant, Mike Pyle, Kiichi Kunimoto and Josh Burkman, with losses to Alex Morono, Sage Northcutt, Li Jingliang and Sergio Moraes. He is a solid fighter and would make sense in either Bellator of PFL.

Crowder lost by knockout to both Jairzinho Rozenstruik and Justin Willis, with his lone win coming via DQ over Greg Hardy. Cole Shelton here at BJPenn.com previously reported that Crowder decided to retire from the game and the UFC has mutually released him.

Mueller won her UFC debut over Shana Dobson before dropping fights to JJ Aldrich, Poliana Botelho, and Yu Wanan. She could head to Invicta FC next.

Gonzalez lost to Jim Miller, Drew Dober and Gregor Gillespie, with his lone UFC win over JC Cottrell. He got lost in the shuffle in the stacked UFC lightweight division and was cut.

In Holobaugh’s second stint in the UFC, he lost to Raoni Barcelos, Shane Burgos, and Thiago Moises. He also lost to Steven Siler in his first UFC stint. Although his competition was fierce, he just didn’t get the job done.

Salmon was knocked out by both Randy Costa and Khalid Taha in the first round. Despite his standing as a former top prospect, he just didn’t live up to the hype in the UFC.

Edwards lost to both Don Madge and Dennis Bermudez and the UFC evidently didn’t see enough from him to keep him around any longer.

Akman made his UFC debut earlier this year and lost a close decision to Sergey Khandozkho before dropping another decision to Jake Matthews. Neither fight was particularly memorable and the UFC decided to just release him.

Zuniga’s lone UFC bout was a majority decision loss to John Gunther in July 2018. If anything, it’s amazing he lasted this long on the roster.

What do you make of the UFC’s latest roster cuts?