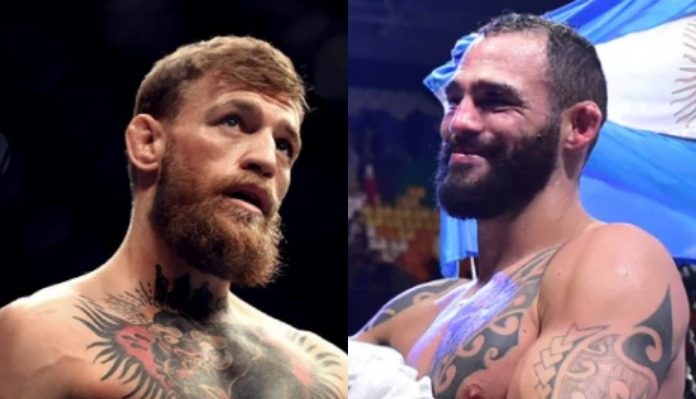 Santiago Ponzinibbio is on a mission to fight the best, and be the best. To do this, Ponzinibbio knows he has to be the welterweight champion and then defeat arguably two of the pound-for-pound best in Georges St-Pierre and Conor McGregor.

Ponzinibbio most recently fought last weekend in his home country of Argentina in which he defeated Neil Magny by fourth-round TKO. The win should catapult Ponzinibbio into the top-eight if not higher in the rankings. However, he believes he deserves the next title shot, and then a fight with McGregor and St-Pierre.

“Tyron Woodley, when he got the title shot, he had six fights for the company,” Ponzinibbio said to MMAJunkie. “He won four and lost two. He lost to Rory MacDonald and then got two fights – two easy fights. [Josh] Koscheck and that other guy, and they gave him a title shot. Come on! This is ridiculous!

“My fights are exciting. He’s not an exciting fighter,” Ponzinibbio continued. “I opened a new market in my country with the pressure and the expectations. I won for my people – that is something Tyron is not ready for. And that is something he will never do.

“I know I’m ready. I know I’ll finish Tyron,” he added. “I know I’ll knock him out, but I need the opportunity.”

Meanwhile, if Ponzinibbio doesn’t get his wish for a title shot with Woodley, he wants to fight McGregor or St-Pierre. He wants those fights for the money and the fact that he believes he would win rather easily.

Ultimately, it doesn’t seem likely that Ponzinibbio will fight any of those three in his next fight. He simply needs one more win over a top-five welterweight to show he deserves a title shot. When he does get that shot, he is confident he will hear ‘and new.’

Do you think Ponzinibbio would defeat McGregor, St-Pierre, and Woodley?