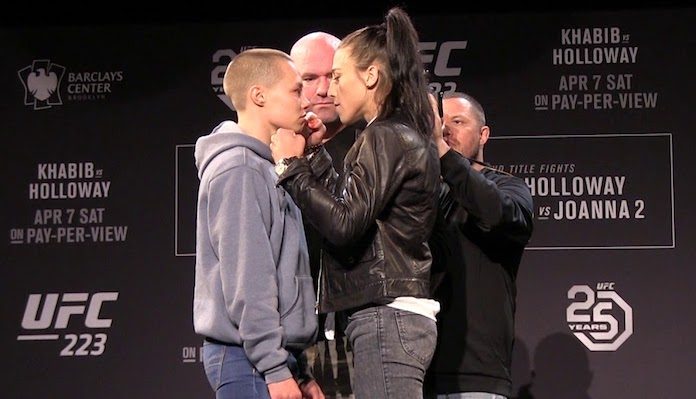 Rose Namajunas has credited Joanna Jędrzejczyk for giving her the blueprint on the right way to approach a fight against Zhang Weili.

“Thug Rose” went into her title fight at the weekend knowing that many viewed her as the underdog – but coming out of it, she was the one who had her hand raised as she recaptured the UFC strawweight title.

She did so with an emphatic head kick that came less than two minutes into the fight, stunning everyone in attendance as well as the many fans watching around the world.

During a post-fight interview with Megan Olivi, Namajunas went into more detail about how “Joanna Champion” unintentionally helped her out.

“I have been seeing the left high kick in my head just because I watched her fight with Joanna and she’s kind of open for that,” Namajunas said. “But that wasn’t the way that I seen the finish in the fight. I seen this fight going many different ways, some bad, some good. And I just had to have faith.”

“I just had to get my range and just had to get patient. She was feeling confident cuz she was touching me with the inside low kick and the jab. Her jab was a nice lil jab she stuck in there. But I think it just helped me get my range and I just controlled my breathing and everything. I was prepared to go for all 25 minutes so I just stayed calm.”

Namajunas’ rise back to the top has been nothing short of remarkable. Now, you really have to wonder whether a third fight against Joanna Jędrzejczyk is a distinct possibility.

Who will Rose Namajunas defend her newly won belt against first? Let us know your thoughts down in the comments, BJPENN Nation!