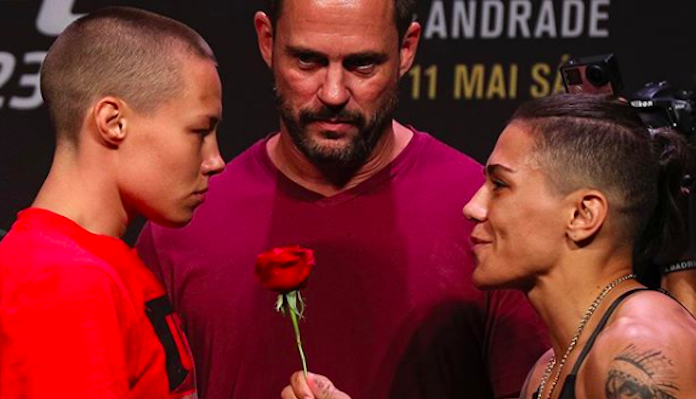 A rematch between former UFC strawweight champions Rose Namajunas and Jessica Andrade is “close to being finalized” for the UFC 249 card on April 18 in Brooklyn, according to ESPN’s Ariel Helwani.

Rose Namajunas vs. Jessica Andrade 2 is close to being finalized for UFC 249 on April 18 in Brooklyn, according to multiple sources.

“Rose Namajunas vs. Jessica Andrade 2 is close to being finalized for UFC 249 on April 18 in Brooklyn, according to multiple sources,” Helwani reported on Twitter.

Namajunas and Andrade first met in May of 2019. On that night, Andrade, the challenger, weathered some early adversity to knock Namajunas out with a vicious, second-round slam. The Brazilian’s Octagon-shaking title win was widely viewed as one of the best comebacks of the year.

From there, Andrade attempted to defend her title against Hebei, China’s Weili Zhang. In a shocking blowout, Zhang swiped the title from Andrade via TKO in just 42 seconds. Zhang still owns the title, and will attempt to defend it against the former champion Joanna Jedrzejczyk at UFC 248 in March.

News of this matchup is likely to surprise some fans, given that Namajunas has recently given reason to believe that her interest in fighting professionally is dwindling.

“I lost the passion for martial arts and fighting. Mainly for fighting,” Namajunas said on Ariel Helwani’s MMA Show recently (transcript via MMA News). “I found my passion again. I went back to Minnesota to see one of my coaches from early on in my amateur career — Greg Nelson. He’s just like a huge inspiration for me.”

Luckily, her passion seems to have returned. She will certainly need to be on point to avenge her previous loss to Andrade.

UFC 249 will be headlined by a lightweight title fight between undefeated champion Khabib Nurmagomedov and streaking challenger Tony Ferguson.

Who do you think will win if Rose Namajunas and Jessica Andrade rematch on the card as planned?