Makhachev, a long-time friend and training partner of Khabib Nurmagomedov, returned to the cage on the UFC 259 main card last Saturday in Las Vegas, where he picked up an impressive submission victory over Drew Dober.

That win cemented Makhachev as one of the most impressive contenders in the lightweight division, but dos Anjos isn’t sold quite yet.

On a recent episode of ESPN’s DC & Helwani show, former two-division UFC champ Daniel Cormier heaped praise on Makhachev, calling him “the most dangerous guy in the division.” Speaking in response to an ESPN MMA Instagram post about that comment from Cormier, dos Anjos attempted to pump the brakes on the Makhachev hype. 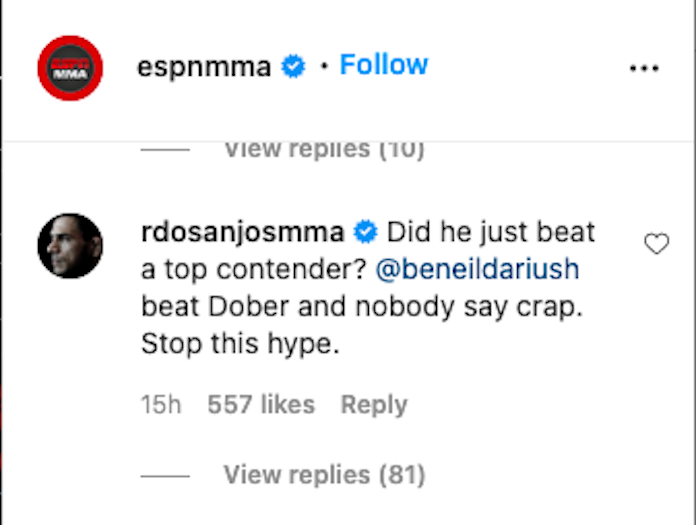 Interestingly, dos Anjos and Makhachev have a bit of history, as the pair were briefly scheduled to fight late last year. However, Makhachev was ultimately forced out of the matchup and replaced by Paul Felder, who dos Anjos defeated by decision.

At present, dos Anjos holds the No. 7 spot in the UFC lightweight rankings, while Makhachev is currently ranked four spots behind him at No. 11. Based on that, it’s certainly possible we could see these lightweight rivals meet in the Octagon in the future.

However, after his win over Dober, Makhachev set his sights on a “dream fight” with former interim lightweight champion Tony Ferguson, who actually holds a win over dos Anjos.

“My dream fight is Tony Ferguson,” Makhachev said after UFC 259. “That’s my dream fight. I just want to make him retire. He talks too much. Khabib is retired, now he keeps pressuring him, for what? I’m here, I have a 7-fight win streak, make this happen.”

What do you think of this comment from Rafael dos Anjos? Are you aboard the Islam Makhachev hype train?