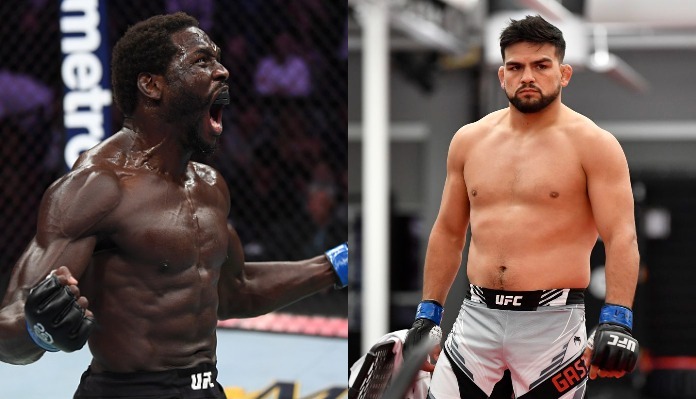 Cannonier (14-5 MMA) was looking to return to the win column on Saturday night, this after suffering a unanimous decision loss to Robert Whittaker in his most recent effort. That loss had snapped a three-fight winning streak for ‘The Killa Gorilla’, as he had previously scored TKO victories over David Branch, Anderson Silva and Jack Hermansson.

Meanwhile, Kelvin Gastelum (16-8 MMA) entered tonight’s UFC Vegas 34 headliner with Jared Cannonier also looking to rebound from a recent loss to ‘The Reaper’. The former TUF 17 winner had gone just 1-4 over his past five Octagon appearances, his lone win in that time coming against Ian Heinisch by way of decision.

Tonight’s UFC Vegas 34 main event proved to be a thrilling back and forth affair. Jared Cannonier and Kelvin Gastelum standed and traded punches for twenty-five straight minutes, much to the delight of the fans in attendance. After five rounds of action, ‘The Killa Gorilla’ was awarded a unanimous decision victory.

Check out how the pros reacted to Cannonier vs. Gastelum below:

At this pace it can’t go 25 minutes

KG has taken the shots well from Cannonier but man, does he look sharp tonight. Great footwork, that JC hasn’t been able to really figure out. I picked JC to win but KG proving me wrong! #UFCVegas34

That is an egregious misunderstanding of the unified rules. KG is winning.

Whoever is tracking the strike count- do better. That is all.#UFCVegas34

Shows what I know. They’ve been buzzing for 25 minutes. Good fight main event #UFCVegas34 Canonnier for the decision, gotta make a bottle GN

Very competitive. A little more volume and I thought KG would’ve taken it or even pressing JC against the cage more. Big win for JC but KG is a savage! He’s fought all the best guys that 185 has to offer in the UFC https://t.co/Judmz0Crta

Who would you like to see Jared Cannonier fight next following his decision victory over Kelvin Gastelum at tonight’s UFC Vegas 34 event? Share your thoughts in the comment section PENN Nation!