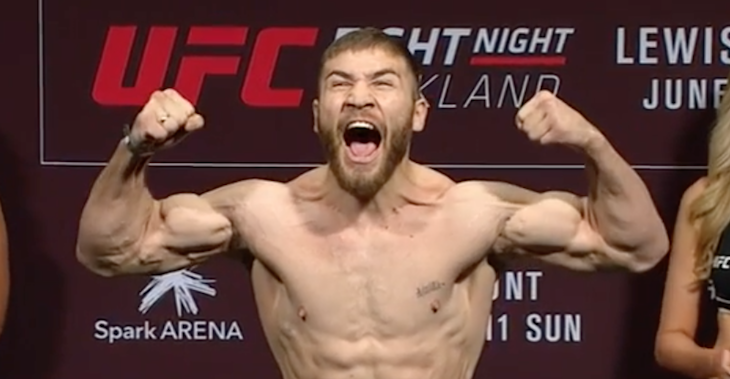 Ion Cutelaba (15-4 MMA) entered UFC Copenhagen looking to rebound, this after suffering a submission loss to Glover Teixeira in his most recent Octagon appearance at UFC Sunrise.

Prior to the setback, Cutelaba had scored back-to-back finishes of opponents Henrique da Silva and Gadzhimurad Antigulov.

Meanwhile, Khalil Rountree (8-4 MMA) was last seen in action at April’s UFC 236 event, where he scored a unanimous decision victory over Eryk Anders.

Tonight’s fight last only of a couple of minutes, as Ion Cutelaba was able to get Khalil Rountree to the ground early, where he proceed to unleash some nasty ground and pound.

The early barrage was enough for the referee to step in and call a stop to the action just 2:35 into the opening frame.

Check out how the pros reacted to Ion Cutelaba defeating Khalil Rountree via first round TKO below:

This’ll be a good fight

Rountree was loading up. Wanted to ko him too much. #UFCCopenhagen

Cutelaba has finished all but one his 15 career wins. 12 of those wins were KO/TKO and 11 of those 12 KO/TKO victories have come in the 1st round, per @ESPNStatsInfo.

Cutelaba with an incredible performance. Took some big shots from Rountree like they were nothing.

Who would you like to see Ion Cutelaba fight next following his first round TKO victory over Khalil Rountree at today’s UFC Copenhagen event? Sound off in the comments section PENN Nation!