Over the course of the last few weeks we’ve seen a lot of remarks made about the ongoing Russian invasion of Ukraine – especially within the MMA sphere. There are a string of different views and opinions that have been brought to light and as the war continues, it seems apparent that things will only continue to intensify from here.

For the most part, there’s been a lot of condemnation for Putin and what he’s attempted to do to Russia’s neighbours. However, a handful of individuals have opted to side with him in this endeavour.

Within the UFC, former middleweight contender Paulo Costa has come into the spotlight for a tweet that has now been deleted from his page after it caused a great deal of controversy. 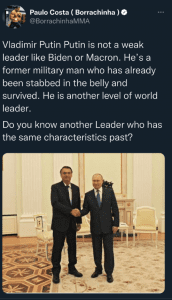 “Vladimir Putin Putin is not a weak leader like Biden or Macron. He’s a former military man who has already been stabbed in the belly and survived. He is another level of world leader. Do you know another Leader who has the same characteristics past?”

The man alongside Putin in the picture is controversial Brazilian president Jair Bolsonaro, who Costa has voiced his support for in the past.

The fragile state of what’s happening in Ukraine isn’t lost on anyone with Putin, essentially, declaring war on democracy. While Costa may believe in what he’s saying, the status quo might begin to shift if Russia decides to escalate in its invasion attempts.

What are your thoughts on what Paulo Costa said? Do you expect to see him back in the Octagon before the end of the year, or do you think his time with the promotion is coming to an end? Let us know your thoughts down in the comments, BJPENN Nation!