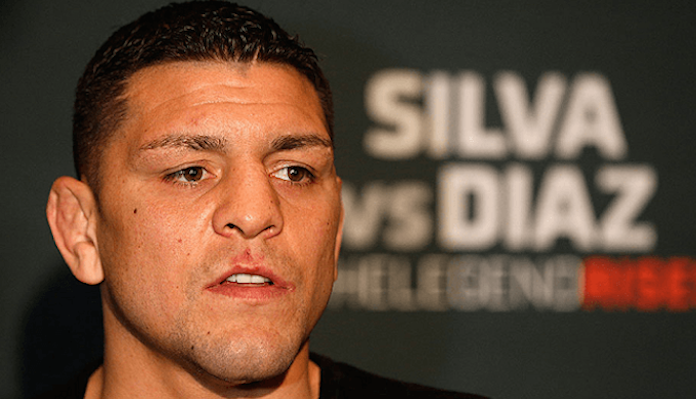 Nick Diaz and Robbie Lawler 2 will now be a middleweight fight.

According to MMA journalist, Ariel Helwani, the rematch at UFC 266 on Saturday between the two fan favorites has been changed from a welterweight scrap to a middleweight bout. The specific reason for the late change wasn’t revealed but the fight will still be a five-round non-title fight. Although there has been no reason for the move, both Diaz and Lawler have expressed a desire to cut less weight these days.

The good news for fight fans is the fight is still happening and the weight isn’t much of a concern. Nick Diaz also hasn’t cut down to welterweight since 2013 as his last fight in 2015 was a middleweight bout. Robbie Lawler, meanwhile, has also fought at middleweight in his career despite being known for his time as a welterweight.

Nick Diaz (26-9 and two No Contests) has not fought since he suffered a decision loss to Anderson Silva back at UFC 183. The fight was overturned to a No Contest after both men tested positive. Prior to that, he lost back-to-back decisions to Georges St-Pierre and Carlos Condit for the undisputed and interim UFC welterweight titles, respectively. In his career, he holds notable wins over B.J. Penn, Robbie Lawler, Paul Daley, Gleison Tibau, and Frank Shamrock among others.

Robbie Lawler (28-15 and one No Contest) is on a four-fight losing skid and hasn’t fought since last August when he dropped a decision to Neil Magny. His other losses came to Colby Covington, Ben Askren, and Rafael dos Anjos. The former UFC welterweight champion holds notable wins over Carlos Condit, Donald Cerrone, Rory MacDonald, Johny Hendricks, and Matt Brown among others.

UFC 266 goes down on Saturday from the sold-out T-Mobile Arena in Las Vegas, Nevada. The main event of the card seed Alexander Volkanovski defends his belt against Brian Ortega. Valentina Shevchenko faces Lauren Murphy in the co-main event the fight after Diaz and Lawler have their rematch.

What do you make of Nick Diaz vs. Robbie Lawler 2 now being a middleweight fight?