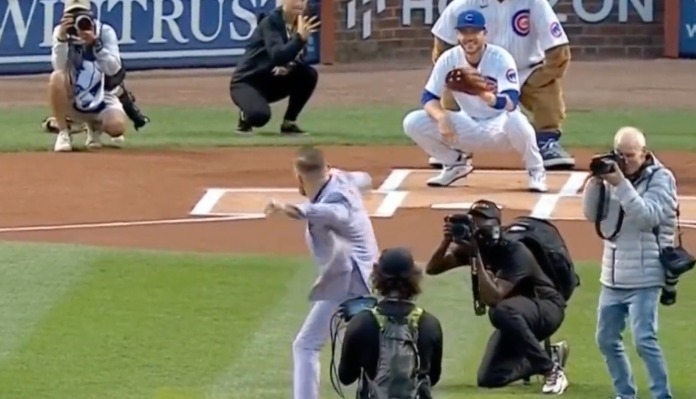 Conor McGregor threw out the first pitch at the Chicago Cubs game on Tuesday and didn’t have much success.

McGregor was at the Dallas Cowboys game on Sunday in Los Angeles as he is rehabbing his knee but took a trip to Chicago on Tuesday as the Cubs hosted the Minnesota Twins. He threw out the first pitch and given he is a professional athlete many expected him to have success throwing the ball but that is far from the case.

The former UFC featherweight and lightweight champion pitched the ball well wide of the plate and high. McGregor was throwing the ball to Patrick Wisdom who turned and saw the ball go way over his head and hit the netting protecting the fans. The mascot then turned around and gave McGregor a confused stare.

The good news for Conor McGregor is he is not a baseball player and doesn’t have to worry about throwing baseballs. He also was able to stand on his leg and put weight on it which is a good sign for his rehab, as of course, he broke his leg back in July in his fight against Dustin Poirier.

McGregor last fought back at UFC 264 last July where he lost by TKO doctor stoppage in his trilogy bout with Poirier. Prior to that, he was knocked out by Poirier in January in his return to the Octagon over a year after he TKO’d Donald Cerrone. The good news for the Irishman is he recently gave a positive update on his recovery.

“I feel like I could kick right now,” McGregor said to journalist Adam Glyn. “I honestly feel like I could kick right now, but I’m just got to listen to the doctors and listen to the people that guided me. That’s what I’ve done so far. I’ve committed myself to the work. I’m back on the feet. It feels so good to be back on the feet.”

What do you make of Conor McGregor’s first pitch?