Nick Diaz has responded to a recent accusation from Diego Sanchez, who claimed the former Strikeforce welterweight champ used to send him angry emails.

Earlier this week, during an appearance on Mike Swick’s Real Quick podcast, Sanchez accused Diaz of bombarding him with hateful emails, some of which even targeted his mother and father.

“Me and Nick Diaz hated each other,” Sanchez claimed (via MMA Fighting). “Nick Diaz used to send me e-mails. He found my e-mail, he talked to one of the MMA journalists at the time, there wasn’t many. Gave him my e-mail and he would e-mail me hate mails.

Despite these accusations from Sanchez, Diaz has a different recollection of things. Speaking on his Instagram story, the former Strikeforce champ vehemently denied Sanchez’s comments. 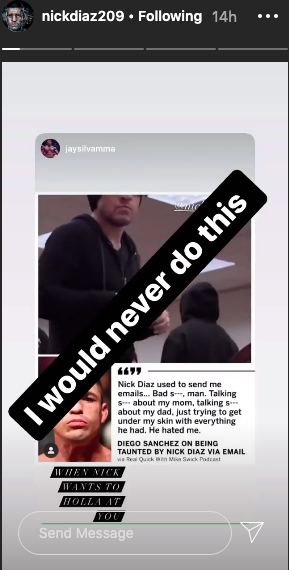 “I would never do this,” Diaz wrote.

While Diaz denies ever sending hate mail to Sanchez, there’s no denying that the two MMA pioneers had some ill will toward one another.

“He was on the show, and basically, he’s got a huge background,” Diaz said of Sanchez in a 2005 interview with Thomas Gerbasi of UFC.com (h/t Bloody Elbow). ““He’s got almost 20 wins and he’s beaten some good people at jiu-jitsu, but he’s fought at a heavier weight class – which means slower and dumber guys – or fought guys with no record that were easy to beat, or guys with a lot of tattoos and their hair dyed. He’s beaten a lot of those type of guys and it just built his record up. The thing is, I don’t think he’s fought anybody really that great in fighting. They put him on that show with all these other guys that sucked – they were terrible. (Josh) Koscheck was the best guy and that was just because he was the best wrestler.”