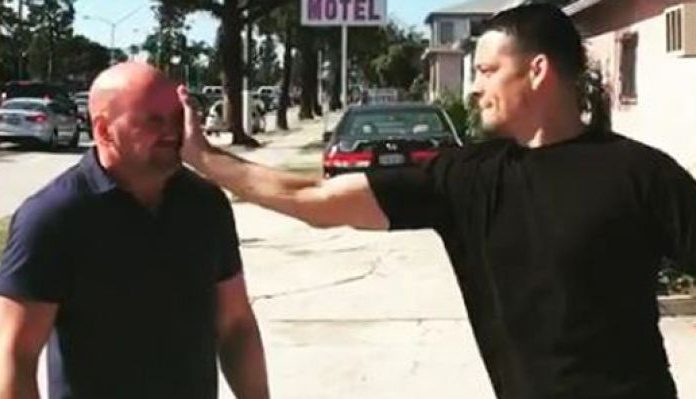 After Khabib Nurmagomedov defeated Conor McGregor at UFC 229, a post-fight brawl ensued. Nurmagomedov went after Bellator welterweight Dillon Danis, who was in McGregor’s corner. While that was happening, some of Nurmagomedov’s teammate’s attacked McGregor inside the Octagon.

Since Saturday night, Nurmagomedov still has not received his fight purse. And, UFC President Dana White said if any of the people who attacked McGregor inside the Octagon are UFC fighters they would no longer be apart of the company.

Well, UFC featherweight Zubaira Tukhugov happened to be one of those people that attacked McGregor. Already, his fight against Artem Lobov in UFC Moncton has been canceled. But, Tukhugov is still is on the roster.

Not only is Tukhugov’s fight off, but Nurmagomedov also posted a fiery statement. He stated he would never fight in the UFC again if Tukhugov is released. Well, apparently that isn’t a big enough threat as fan favorite Nate Diaz posted to Twitter saying they can fire him instead of Tukhugov.

@danawhite please let kabobs dumbass friend stay in @ufc
Fire me it will be bettter this way.
I think it’s more fair that way …

“Dana White, please let kabobs dumbass friend stay in UFC. Fire me it will be better this way. I think it’s more fair that way…”

Diaz was originally supposed to make his long-awaited return to the Octagon at Madison Square Garden for UFC 230 on November 3. He was slated to be the co-main event. However, his opponent, Dustin Poirer is out of the fight now with an injury, meaning Diaz will be off the card as well.

It is known that Diaz doesn’t have the best relationship with the UFC. From storming off at the press conference when it was supposed to be about him making his return when they announced the McGregor vs. Khabib fight. To, Diaz saying he won’t fight on the card, to him announcing prematurely that Poirer and himself would be the main event at UFC 230 for a 165-pound belt.

No one truly knows what is going in Diaz’ head, but this is another wrinkle that he isn’t happy with the UFC.

What do you make of Diaz’ comments?