Poirier (28-6 MMA) was originally challenged to a middleweight fight by Diaz (20-13 MMA) immediately after winning his rubber match with Conor McGregor at UFC 264.

‘The Stockton Slugger’ had shared a photo of he and Dustin Poirier squaring off for their previously slated bout at UFC 230 and captioned it “185lbs. Pull-up.”

‘The Diamond’ quickly fired back at Nate Diaz with the following reply: ”I’d touch you up at any weight.”

Dustin Poirier and Nate Diaz were previously slated to collide in a lightweight contest at UFC 230 in 2018. However, the bout fell apart for multiple reasons and never ended up being rescheduled. 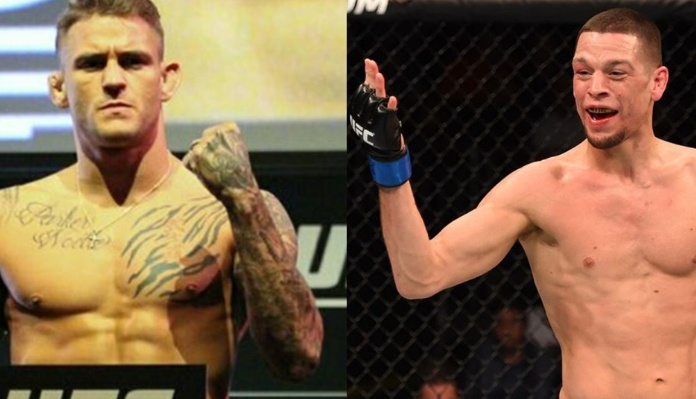 Although Dana White and company are hoping to have Poirier square off with newly crowned UFC lightweight champion Charles Oliveira in his next fight, the Louisiana native appears to have other plans.

Dustin Poirier took to social media earlier this evening where he seemingly called out Nate Diaz with the following tweet: “Nathan?”.

Poirier’s post clearly made its way past Diaz who promptly issued the following response:

Let’s fight don’t be scared this time tho

“Let’s fight don’t be scared this time tho” – Diaz wrote on Twitter.

Nate Diaz most recently competed at last month’s UFC 263 event, where he suffered a unanimous decision loss to Leon Edwards in a welterweight contest. The Stockton native nearly finished the British fighter in round five, but wound up being handed a loss as he was outpointed in the first four rounds.

As for Dustin Poirier, the former interim lightweight champion is now riding a three-fighting winning streak and has won 8 of his past 9 bouts overall. Poirier’s most recent setback came at the hands of Khabib Nurmagomedov, who he lost to by way of submission at UFC 242 in September of 2019.