Cormier and his “RC and DC” co-host Ryan Clark recently shared their list of the top five boxers in mixed martial arts. Check out the full lists that both fighters shared below.

In the comments section, fighters such as Diaz and dos Anjos, and even UFC middleweight Eryk Anders, criticized Cormier for their lists. Check out what all of them had to say. 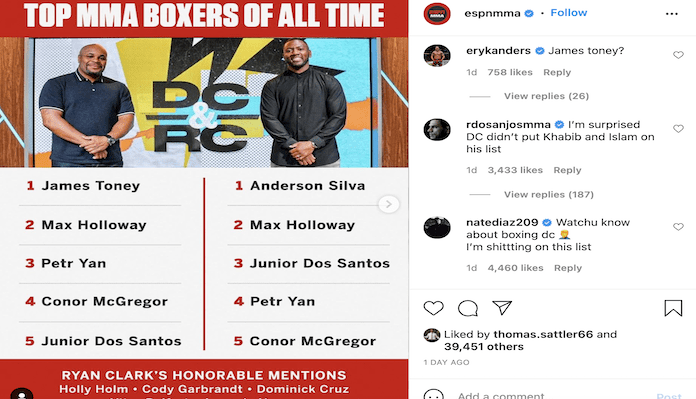 It’s pretty clear that there are a lot of people out there who are questioning DC’s decision to put James Toney as the No. 1 boxer in MMA history. While on paper that might be true based on the fact he was a champion in professional boxing, when it comes to applying boxing to MMA, he was not able to do that as he was taken down and beaten up by Randy Couture in his lone UFC fight at UFC 118. When you compare Toney to fighters such as Max Holloway for instance, who have both amazing boxing as well as the ability to keep the fight standing, there is a reason why DC is coming under fire for his best boxers list.

As for what dos Anjos said to him, dos Anjos is taking another shot at DC for being biased, an accusation that many fighters have made towards him because he often cheers loudly for the fighters at American Kickboxing Academy. With Diaz, he just thinks that Cormier’s list is not a good one and felt like he needed to call him out publicly for it.

Do you agree with the criticism from Nate Diaz and Rafael dos Anjos directed towards Daniel Cormier?