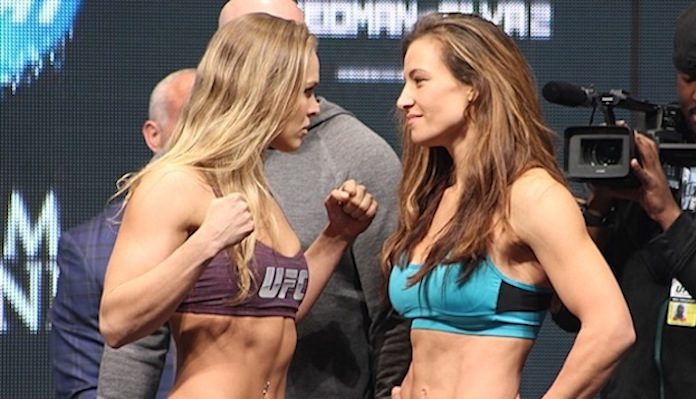 Miesha Tate is hoping she can one day have a trilogy fight with Ronda Rousey.

Tate and Rousey first met in March of 2012 in Strikeforce as Tate was the champ but it was Rousey winning by first-round submission. They then had a rematch after coaching a season of TUF but at UFC 168 in 2013, the result was the same as Rousey submitted Tate in the third round to defend her UFC title.

The two never fought again and both Rousey and Tate walked away from the sport. Yet, as “Cupcake” is set for the second fight of her comeback, she still admits the trilogy with Rousey is something she wants.

Miesha Tate said during the interview it would be her ‘dream’ to fight Ronda Rousey again. However, she makes it clear she only wants the fight to happen if “Rowdy” wants to come back.

“Don’t get me twisted,” Tate said. “I’m not trying to call out a brand-new mama. This has to be something she wants, too. I wouldn’t want to just call her out. She’s doing her thing, she’s retired. I would want to fight her at her best. If she chose she wanted to come back and she was like, ‘I want to come back and fight Miesha Tate or whoever,’ I would love another shot at her. But only if she was taking it seriously and she was training at her best and that’s what she wants, too.”

Whether or not Rousey would ever return is uncertain. But, for now, Tate is just focused on her UFC Vegas 43 main event fight against Ketlen Vieira.

Would you like to see Miesha Tate vs. Ronda Rousey 3?