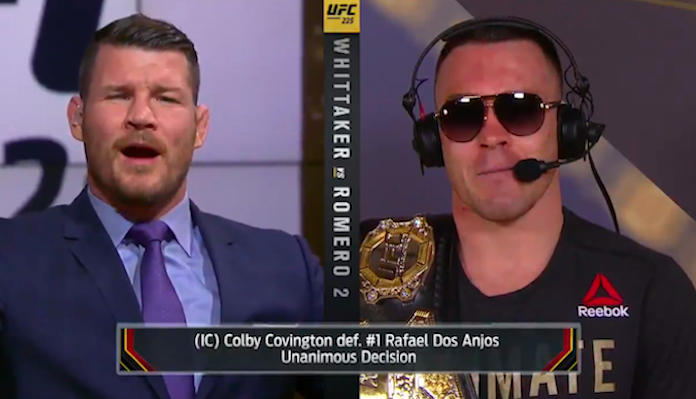 In a Q&A on his YouTube channel, Bisping was asked about his power being ranked the same as Colby Covington’s in the UFC 4 video game. The Brit obviously wasn’t happy with EA Sports decision, as he believes he is a much harder hitter than Covington and it’s showed with both of their careers.

“Yeah, I’m not happy with this EA Sports nonsense. You know what I mean? What is going on? The same punching power as Colby Covington? Are you serious?,” Bisping said on his YouTube channel. “Listen, no disrespect to Colby, are you serious? Come on, when has Colby ever one-punch KO’d someone?”

In their careers, Bisping has 18 knockouts out of 30 wins, and out of those 18, three of them were pure one-punch KO wins. Covington, meanwhile, only has four knockouts in 18 wins but two of them are verbal submissions and none are KO’s, so Bisping does have a point that he does have more power.

It also shouldn’t be a surprise to see Bisping take a jab at Covington as the two have traded shots at one another in the past. After “Chaos” defeated Rafael dos Anjos at UFC 225 to win the interim welterweight title, Michael Bisping, who was working the desk, has a nasty on-air exchange with Covington.

Whether or not Bisping’s comments about his and Colby Covington’s punching power will change anything is to be seen. Bisping has not fought since 2017 when he suffered a KO loss to Kelvin Gastelum so it would be hard to change his rating. But, the more likely scenario is EA Spots lowering Covington’s power rating.

Covington is set to headline UFC 272 on March 5 against Jorge Masvidal in a highly-anticipated fight. In his most recent effort, ‘Chaos’ suffered his second career loss to Kamaru Usman for the welterweight title.

What do you make of Michael Bisping and Colby Covington having the same punching power in EA Sports UFC 4?