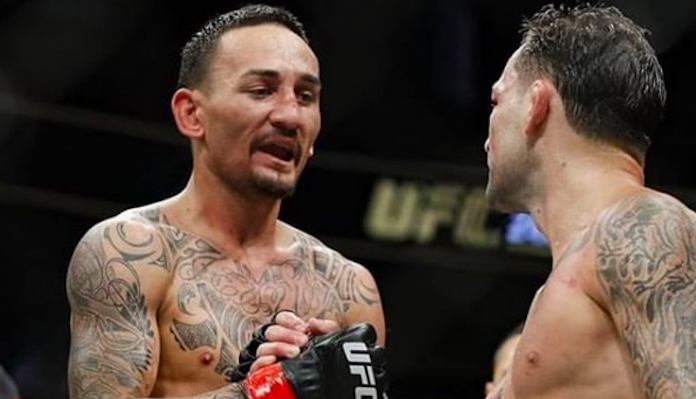 UFC featherweight contender Max Holloway has told Khabib Nurmagomedov he wants to visit Dagestan one day soon after the latter confirmed his retirement.

The MMA world has known it to be true for quite some time, but now it seems to be official that Khabib Nurmagomedov is staying retired. That’ll come as quite the blow for both his fans and for fans of the sport in, general, not to mention some fighters on the UFC roster.

That includes Holloway who, some may remember, actually stepped in to fight Nurmagomedov on short notice during the chaotic UFC 223 fight week. It didn’t quite come to fruition due to weight-cutting issues but it did start a conversation about what would happen if the two never met.

While we’ll likely never know the answer to that, it’s clear to see Holloway has a whole lot of respect for “The Eagle”.

Congratulations @TeamKhabib Peace be with you brother. I want to visit Dagestan someday soon. https://t.co/mKHJEnWCZS

“Congratulations @TeamKhabib Peace be with you brother. I want to visit Dagestan someday soon.”

Still, while Khabib’s mixed martial arts journey may have come to an end in its current form, the same can’t be said for Holloway.

After his big win over Calvin Kattar, “Blessed” seems destined to get another shot at the UFC featherweight championship, whether it’s a trilogy against Alexander Volkanovski or a rematch against Brian Ortega.

He’s easily one of the most exciting fighters to watch in the promotion and while some may not agree, the same can be attributed to Khabib Nurmagomedov.

He may not have been everyone’s cup of tea and that’s understandable, but whenever he fought, the world tuned in to watch, which is probably one of the reasons why Dana White insisted on trying to make him reconsider. Ultimately, though, Khabib hung up his gloves.

If they had fought back at UFC 223, or if they fought today, who would win between Khabib Nurmagomedov and Max Holloway?